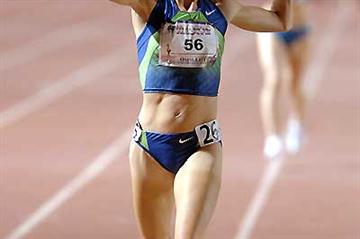 Shalane Flanagan, 25, who sped to an Area 3000m indoor record in Boston this winter was the star of Friday night’s session (13) at the 49th Mt. San Antonio College Relays thanks to a splendid 14:44.80 US record for the women’s 5000m which is also the current world season lead.

The first day of the Mt SAC Relays completely banished any notion that Friday the Thirteenth is a day to be avoided.

Shalane Flanagan stole the show during the evening’s Distance Carnival. It was a brilliant display of high-level solo running by the 25-year-old Flanagan. With clubmate Erin Donohue doing the pacemaking work, the pair separated themselves quickly from the rest of the twenty-three runners in the field. Donohue took her employer through the first kilometre in 2:55.0, but even before hitting the 2K mark, Flanagan decided to take matters into her own hands.

Unofficially timed in 5:58, 8:51.6 and 11:52.3 for the next kilometers, Flanagan was right on target to claim the US record as Donohue shouted encouragement during the eight laps which remained after her abdication. The old record had been 14:45.35 by Regina Jacobs in winning the 2000 US Olympic Trials.

It was perhaps not surprising that Flanagan had this record on her radar for the season. Last winter in Boston, she lowered the American indoor 3000 metres record by almost six seconds to 8:33.25. Such a quantum leap in her quality level presaged last night’s performance.

The strong winds of Thursday which sparked numerous fires in the nearby Los Angeles area were absent on Friday, and the 17C temperature produced ideal running conditions for the evening races.

While the spectators were still buzzing about Flanagan’s performance, the men took off on their 5K race. The culmination was a riveting three-man scramble at the end, won by Mexico’s Juan Barrios in a world-leading 13:11.37.

New Zealand’s Adrian Blincoe was the tempo-setter for the first three kilometres with a pace of 2:39.4, 5:17.4 and 7:57.2.  As he departed, Anthony Famiglietti of the US found himself in the frontrunner’s position, with Barrios and fellow Mexican David Galván in close pursuit.

The three stayed glued together, even when the final sprint started just after the bell. Off the final turn, however, Barrios moved ahead to claim the win, as Famiglietti took second in 13:11.93 with Galván third at 13:12.18. All three performances were PBs by at least ten seconds.

Led by Kevin Sullivan of Canada at 13:19.27, four additional runners also bettered the A-standard for Osaka.

Earlier in the evening, Korene Hinds of Jamaica won the Women’s 3000m Steeplechase in 9:39.94. Americans Carrie Messner (9:45.18) and Lindsey Anderson (9:46.00) also dipped under the A-standard for this summer’s World Championships.