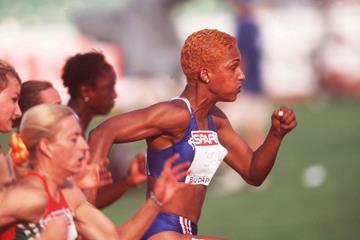 Hosts hammer the opposition as Diagana takes a tumble

Christine Arron took the European 100 metres title from Irina Privalova here tonight, but the Russian defending champion pushed the 24-year-old Frenchwoman to breaking her continental record in doing so.

Despite a poor start, Arron powered away from Privalova over the final 40 metres. Her 10.73sec, with the benefit of a two-metre-per second following wind, puts the Frenchwoman third on the all-time list, behind Florence Griffith-Joyner's 10.49sec world record and the 10.71sec by Marion Jones earlier this year. Privalova took silver in 10.83, and Ekaterini Thanou was third in a Greek record 10.87.

The men's 100 metres champion of four years ago, Linford Christie, was not around to defend his title, but he had a strong influence in its outcome, having coached the winner, Darren Campbell, who even broke his mentor's championship best performance, recording 10.04sec. Campbell's British team mate, Dwain Chambers, the world junior record-holder, was runner-up in 10.10sec, with Greece's Constantin Papadias taking bronze with 10.17. Notable in fourth was the Italian veteran, 36-year-old Stefano Tilli (10.20).

"This is one of the stepping stones that Linford and I have planned so that I can develop to take on the Americans," Campbell said.

By the time of the men's 100 metres final, the vast Nep Stadium was a cauldron of noise, stimulated by a thrilling hammer final in which the Hungarian hosts collected their first medals of these championships, to a rapturous reception from the home crowd, estimated to be more than 20,000.

Tibor Gecsek, with a fifth-round 82.87-metre lifetime best took the gold, Balazs Kiss's 81.26m in the final round not enough to move him out of silver medal position.

Germany's Tanja Damaske secured the women's javelin title with her first throw - 69.10 metres - representing the 1990 IAAF World Junior champion's graduation. Silver medallist was Tatyana Shikolenko, of Russia (66.92m), with Finland's Mikaela Ingberg, winning another bronze medal to go with that which she won at the 1995 IAAF World Championships.

In the women's 10,000 metres, Sonia O'Sullivan, running the 25-lap track event for the first time in her career, won gold for Ireland. In a slow-run race, the 1995 5,000 metres world champion sat behind the leaders - Fernando Ribeiro of Portugal and Britain's Paula Radcliffe - content to follow the pace (halfway was reached in 16:08.35). But on the final lap, using her miler's speed, O'Sullivan unleashed a devastating sprint finish - covering the last 200 metres in an unofficial 28.1sec - and leaving Ribeiro trailing.

"I knew Sonia was fast, but I did not expect her to be that fast," said Ribeiro, the Olympic champion. O'Sullivan's winning time was 31min 29.33sec, with Ribeiro winning silver (31:32.42) and Romanian marathon runner Lidia Simon (31:32.64) outsprinting Olivera Jevtic for bronze, Jevtic at least setting a Yugoslavian national record (31:34.26).

Stephane Diagana's elimination from the 400 metres hurdles was one of the biggest shocks of these championships so far. It was not just that France's world champion failed to progress beyond his semi-final that was so surprising, but the manner of his exit: comfortably ahead of the opposition coming to the ninth hurdle, Diagana cleared the barrier with his lead leg  but caught it with his trail foot as he landed, and was sent tumbling to the track.

"I thought as I came off the last bend I had comfortably qualified," said Diagana, who up to that point in the race had shown little sign of the heel injury which has blighted his season. "It just makes it twice as hard to accept."

Diagana's tumble left the way clear for Pawel Januszewski of Poland to take the race, clocking a national record 48.90sec. Favourite for Thursday's final must be the winner of the other semi-final, Ruslan Mashchenko, of Russia, who looked easy as he was timed at 48.64sec.