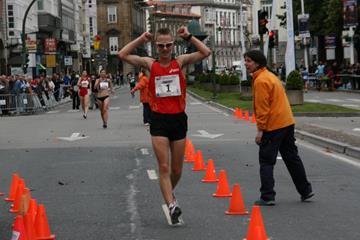 Jared Tallent’s second triumph in the IAAF Race Walking Challenge could be said to be very much a family affair.

The 2008 winner, and second last year, topped the standings in 2013 and banked a cheque for USD$30,000 thanks in part to his new coach: his wife and international race walker Claire, herself a former winner in challenge races.

The Tallents also moved from their Australian Institute of Sport base in Canberra to Adelaide, but not from Jared’s lofty position in the Challenge.

However, when it came to really big winners, Yelena Lashmanova was the woman in the money.

It underlined the 21-year-old’s meteoric rise since her surprise IAAF World Race Walking Cup win on home turf at Saransk two years ago.

In fact, the almost seamless production line of Russian winners saw Lashmanova start her season with a win at Portugal’s Rio Maior race in April.

She took three Challenge victories in total during her unbeaten season for a winning tally of 38 points.

Portugal’s Ines Henriques won in Chihuahua and La Coruna to finished a close second in the Challenge with 34 points, and earn USD$20,000, while her teammate Ana Cabecinha was a rather distant third with 23 points after three podium finishes and got USD$14,000 for her efforts.

Behind Tallent’s winning total of 34 points, the Portuguese veteran Joao Vieira was second with 28 points and got USD$20,000, helped by a win on home soil in Rio Maior, while Slovakia’s Sesto San Giovanni winner and 2010 IAAF World Race Walking Cup 50km champion Matej Toth was third in this year’s series with 26 points.

Chihuahua kicks off the Challenge

Isaac Palma got the 2013 Challenge under way with a 20km win in 1:24:02 on home soil in Chihuahua, a race that produced an all-Mexican top nine save for Canada’s second-place Inaki Gomez finishing 16 seconds back and Poland’s Gregorz Sudol in fifth.

Portugal’s women have enjoyed good times in the past at the northern Mexican city, despite the 1450m altitude, and it was no different this time either.

Henriques won in 1:33:46 and prevailed by 28 seconds over Cabecinha, and there was more European success when Norway’s Erik Tysse headed the 50km in a good early season time of 3:55:23.

One day later on the other side of the Pacific, Tallent breezed the 20km at the Australian Championships for the sixth year running in a stifling Hobart where his 1:22:10 was 17 seconds better than Dane Bird-Smith, the latter getting a big personal best for the 20-year-old son of former Olympian Dave Smith.

In contrast to the hot weather of the first two meetings, the third Challenge was held in freezing, bitter rain.

Just six days after he won in Tasmania, Tallent toed the line in the Chinese city of Taicang for another 20km.

This time, he was third after a sprint over the last 200 metres that saw China’s Li Jianbo win in 1:18:52, who was chased home by Zelin Cai who crossed three seconds later.

A surprise in the women’s race at the venue for the 2014 World Race Walking Cup saw 22-year-old Sun Huanhuan take the lead at 8km, regain it in the last 800 metres, before posting a winning time of 1:27:36 that slashed almost two minutes off her best.

It was still all things Asian at Nomi City, Japan, on March 10 when Yusuke Suzuki and Kumi Otoshi belied another torrid day to win on home soil.

It was cold, windy and raining hard but Suzuki set his second national record inside a month on a maze of a course with twists and turns throughout. His totally solo effort brought an outstanding time of 1:18:34.

Otoshi was just as isolated in the women’s race and suffered in the latter stages when the weather was its worst but still breasted the line nearly two minutes before Thi Thanh Phuc Nguyen, but it says much for the growing popularity of the Challenge that the latter was the first Vietnamese walker to finish in a podium place.

Chinese take away victories in Lugano

Lugano a week later on 17 March saw a massive field of 88 in the men’s 20km race jostling for space on the start line in the Swiss city.

However, it was effectively over at the halfway point when China’s London 2012 Olympic Games bronze medallist Wang Zhen was already 31 seconds in front of France’s Kevin Campion.

The Frenchman ultimately had to settle for third when Ukraine’s Ruslan Dmytrenko came past him late in the race, but neither was close to Zhen, who won here in 2011 as well, who crossed the line over a minute clear of the rest in 1:19:08.

Women’s winner Liu Hong set a course record of 1:27:06 by nearly a minute to make it a double Chinese triumph.

Lashmanova comfortably won in Rio Maior on 6 April in 1:28:19 while Vieira, Joao that is, easily headed his twin brother Sergio to win by 45 seconds and the pair created a bit of Challenge history with two Portuguese men being on a podium for the first time.

Podebrady has always been a fast course and, a week after Rio Maior on 13 April, the spa Czech town also boasted a smooth brand new surface around its 1km course.

It was no surprise then that Colombia’s Eider Arevalo broke his national record when winning in 1:19:45, just edging out Tysse, and 1:20 was broken for the first time in this historic race’s 81-year history, although there were plenty who did the same at the 1997 World Race Walking Cup held at the same venue.

Mexico’s Monica Equihua, 30, has had to bide her time before rising to the top but Podebrady saw her post the best result of her career as she won in 1:31:55 and beat the home favourite Lucie Pelantová, consoled no doubt by her personal best of 1:32:08.

Advent of Africa in the Challenge

The first Challenge race ever held in Africa took place on 19 April.

It was hot and humid at the famous Italian race in Sesto San Giovanni on 1 May, so Lashmanova, whose 20km world record is more than seven minutes quicker than her winning time in the Milan suburb, betrayed glimpses of a smile as she coasted to victory in 1:32:07.

Behind her, by almost a minute, came the dependable Henriques and then Cabecinha.

The winner of the men’s 20km race was also down on his previous time, but Toth was delighted that his preparation for the European Cup came with a dividend.

The Slovak walker broke away on the last 2km circuit win in 1:22.02 and beat Poland’s Jakub Jelonek, followed by the familiar names of Bird-Smith, Suzuki and Joao Viera in that order.

Eighteen days later, Toth had to give way in his own Dudince backyard at the European Cup to Russia’s Denis Strelkov and Spain’s Miguel Angel Lopez.

The final 2km was the most exciting race of the day with Lopez gaining on the tiring Russian every yard, and Toth gaining just as quickly on the Spaniard, but with both surging too late to challenge the destination of the gold medal.

In the women’s 20km  race, Russian filled the first five places and were fronted by Anisya Kirdyapkina, who warmed up nicely for the IAAF World Championships at home in Moscow with a good win in 1:28:29, coming home 49 seconds clear of her compatriot Vera Sokolova.

It was Latin America next; in particular, Guatemala City for the Pan American Cup.

As with Vietnam and Mauritius, read Peru in the 2013 list of all things new to the  Challenge, thanks to 19-year-old Kimberly Garcia winning the women’s 20km in  1:35.01, improving on her best by over  five minutes.

Mexico’s Diego Flores was more than two minutes slower when winning here than when he was third in Rio Maior but his 1:24.16 effort was enough to edge out Colombia’s Jose Montana in the men’s 20km.

Tallent, living up to his family name, then won a high quality race in La Coruna over 20km in 1:21:21 to pile up more Challenge points while Henriques also claimed her second victory in this year’s Challenge but was nearly four minutes quicker than Chihuahua win when crossing the line in 1:29:30.

Erick Barrondo had suffered a series of frustration before he got to Dublin for the last of the regular Challenges on 29 June.

The man who gained Guatemala its first ever Olympic medal when he waltzed down The Mall in second place in 2012 had been disqualified in both the 2013 Lugano and Rio Maior races while up with the leaders.

However, in the Irish capital, he was as smooth as the new surface that had been laid in St Anne’s Park to win in 1:20:25 and by exactly three minutes from Spain’s Benjamin Sanchez.

Spain’s Maria Jose Poves, now 35, has walked faster when finishing down the results but got the most important win of her career when finishing first in the Dublin women’s 20km race in 1:29:58.

And so to Moscow, and the IAAF World Championships, where Lashmanova planted a cherry on her cake with a win in the 20km and Tallent’s bronze medal over 50km was enough to prompt him to blow a thank-you kiss to his coach for all her good work.