Of the dozens of Athletissima match-ups that feature prominently on tomorrow evening’s IAAF Diamond League meeting programme, among the most intriguing is the one pitting Matthew Centrowitz of the US, the freshly-minted Olympic 1500m champion, and Asbel Kiprop, Kenya’s three-time world 1500m champion, over the rarely-run 1000m distance.

“Asbel comes from the 800 so it might be a little bit easier for him to approach it,” Centrowitz said.

“For me it's little shorter than what I'm used to, so I have to approach it like an 800 and get out really fast, and use my strength in the last 200 and hopefully be competing with some of these guys.”

That finishing strength was put on vivid display in last week’s tactical 1500m contest in Rio, one which Centrowitz largely led from gun to tape with Kiprop caught too far back too late into the race to make an impact.

Of their Olympic encounter and his 3:50.00 performance, Centrowitz said: "I was prepared for a fast or slow race. Honestly I was actually hoping it would be fast so there wouldn't be as many guys there in the last 400.”

Kiprop admitted that the slow early going wasn’t to his liking.

"It happened that we went a little bit slower than expected," Kiprop said. "Anyway, it was about winning the gold. My colleague Matt Centrowitz was good enough and he was set for any kind of a race. On my side I was eyeing a little bit of a faster race. The chances for Matt Centrowitz were better than mine."

But not so, Kiprop believes, in tomorrow night’s 1000m contest.

“This is where most of us meet and a distance that brings us together,” he said. “It's a race that favours both the 1500m athletes and the 800m athletes. I find it an advantage."

But, Kiprop insisted, “I’m not saying this is a revenge (race). This is sport and I’ve come to do my best.”

Predictions? Only one, by Centrowitz. “I'm sure the stadium record will go down. It's only 2:18.”

Like Centrowitz, Omar McLeod is also relishing his last few appearances in a season that brought him the Olympic title.

"My body is on auto-pilot right now," said McLeod, who dominated the Olympic 110m hurdles final in 13.05. "I am just ready to have some fun tomorrow."

That fun will include a rare outing in the 100m about an hour before the high hurdles competition, his first over the flat distance since he clocked 9.99 in late April.

"It'll be really exciting to see how fast my body can go. I'm really looking forward to it."

That light approach is a welcome respite from the early portion of the season when expectations were high with every race. That's a pressure he welcomes, even when things don't go as planned.

"Pressure is a privilege, when people expect things of you, it is a great position to be in," he said.

"I treat each race, each competition, the same. You have to take each race, one at a time. I had two mishaps in the Diamond League this year which I don't like to talk about, but it happens. It's a humbling experience that helped me come to the realisation that things happen in sport. We're never guaranteed a perfect career. You cannot take any race lightly. You have to always be on your A game.”

With a career best of 12.97, one thing McLeod isn't counting on anytime soon is an assault on Aries Merritt's world record. But he is becoming accustomed to questions about possible record assaults.

"The world record is not an objective, but I will be forced to accept it if comes," he said. "I want to grow more, set goals for after each year. This year the target was to win at the World Indoors and in Rio. I don't want to get too ahead of myself. I have a lot of developing to do before I start focusing on world records.”

Neither is Caterine Ibarguen, the dominant force in the triple jump for the past four seasons, who took the Olympic title in Rio after a runner-up finish in London four years ago.

“To break the world record would be a dream but it’s not an obsession for me,” the Colombian star said.

“To beat 15.50m I would need to work on every aspect of my jump but beyond that the conditions would have to be perfect: the perfect day, the perfect track, a perfect mindset.”

Here, she said, her focus will be on the Diamond Race and securing a fourth straight Diamond Trophy. “I would love to win it many more times.”

Perhaps even as many as Renaud Lavillenie, the only athlete to have won the trophy each season since the series’ inception in 2010. The Frenchman, arriving on the heels of his silver medal finish in Rio, will be looking to pad his Diamond Race lead with a fourth 2016 series win on Thursday.

“The conditions will be good but I don’t know if we can expect to jump for the stadium record of 5.91m so soon after the Olympics," said Lavillenie. "In any case, we’ll try.”

World champion Shawn Barber of Canada, who was a distant tenth in Rio, is looking forward to the competition to help put his first Olympic appearance behind him.

“I am a bit disappointed by my performance,” said Barber, whose 5.50m clearance in Rio was well shy of his 5.91m season’s best. “I had good form and I had good health leading into it. That being said, now is a good chance to learn from it and move forward and try for other aspirations.”

Harrison looking forward to getting back on the track

For Keni Harrison, 2016 disappointment came even sooner. The hottest 100m hurdler in the world for the first half of the season, a sixth-place finish at the do-or-die US Olympic Trials banished all hope for her Olympic aspirations. She followed up the best she could, by clocking a stunning 12.20 world record at the London stop of the IAAF Diamond League two weeks later.

So, the obvious question: how was watching the Olympics from home?

“Watching the Olympics only made me want to train harder and focus on my next meets, beginning with tomorrow." 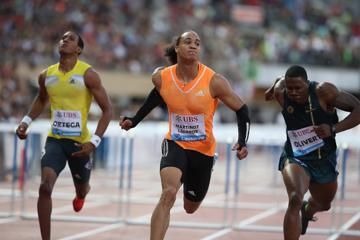 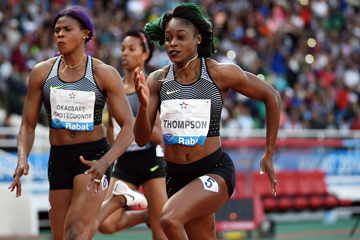