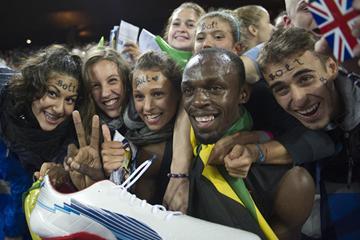 All of the much sought-after stadium tickets for Weltklasse Zürich 2013 have been sold, organisers for the IAAF Diamond League final on 29 August announced on Monday (5).

The famous Letzigrund Stadium will have a capacity crowd of 25,000 visitors that night.

Among the athletes confirmed as competing at the star-studded meeting is Jamaican superstar Usain Bolt, who will be making his sixth appearance in Zurich.

The fastest man of the world will be running the 100m and fans will be treated to a series of sprint highlights.

The women’s 200m will feature both Jamaica’s Shelly-Ann Fraser-Pryce and the USA’s Allyson Felix (USA). The two London 2012 Olympic Games champions will compete even twice, leading their teams in the 4x100m Relay, competing for the Zürich Trophy, in addition to their individual races.

17 out of 19 events of the international programme will be IAAF Diamond League final events.

Two of them, the men’s and women’s Shot Put, will be staged at Zurich Main Station on the Wednesday night (28 August). All seats of the temporary arena in the ticket hall of Zurich Main Station have also been sold. However, fans will still be able to follow the action from a standing area.

Tuesday, 27 August: Kids events (Jugend trainiert mit Weltklasse) at 11 locations in the German-speaking and the Italian-speaking parts of Switzerland.