Horacio Nava gave Mexico a much-awaited gold in the men’s 50km Race Walk and Solonei Rocha da Silva kept Brazil’s dominance in the Marathon as the athletics tournament and the 16th Pan American Games were officially closed on Sunday (30).

On Saturday (29), 2010 World Cup runner-up Nava walked side-by-side with his countryman Jose Leyver Ojeda until the 25th and last lap, when the former made his move and went on to finish in 3:48:58, a respectable time given the high altitude and less than a minute slower than his compatriot Carlos Mercedario’s Games record of 3:47:55, set in 1995.

Nava led the race in Rio 2007 by over a kilometre, but ended up being caught and overtaken within metres of the finish line by Ecuador’s Xavier Moreno, who was absent this time. It was the first time Mexico had lost the Pan Am 50km gold since 1979.

“We trained to avoid what happened in Rio," said the confident winner. "Breaking the record was not the top priority. This medal means a lot. It is a step forward going into London 2012. I have qualified. I want to enjoy this result and take some rest.”

Nava put Mexico back on top of the podium in the continent’s race walking scene, after a gold-medal drought in 2007. Ojeda was rewarded with a personal best of 3:49:16, as well as Guatemala’s Jaime Daniel Quiyuch (3:50:33), who also came within less than a minute of the national record.

More than a month after producing the region’s best performance and breaking the South American record at the World Championships, Ecuador’s Cristian Andres Chocho was disqualified after being in the lead pack until the 28th kilometre. His countryman and 2007 runner-up at 20km, Rolando Saquipay, dropped out after the 30km mark.

Only nine of the 16 walkers finished the race.

On Sunday, Solonei Rocha da Silva displayed a solid performance on the streets of Guadalajara to give Brazil its fourth consecutive men’s Marathon gold at the Games.

The 29-year old led an eight-man group in the first 20km (1:05:04) and sped up to reach a substantial advantage that grew to 75 seconds at the 30km mark. From then on, it was a matter of time and the Penapolis native allowed himself to run the last three kilometres with the Brazilian flag in anticipation for his victory in 2:16:37.

Da Silva succeeded his compatriot and 2007 Games winner Franck Caldeira. Diego Alberto Colorado improved from sixth to silver after a 2:17:13-hour effort, while Juan Carlos Cardona completed a 2-3 for Colombia in 2:18:20.

"Penápolis is the champion," shouted an elated da Silva. “I would like to thank my coach, and my city which should be celebrating.”

A former garbage collector in Penápolis, state of Sao Paulo, he was encouraged to take up distance running and began to train under coach former Marathon runner Clodoaldo do Carmo’s guidance in 1999.

“Three years ago, I was static. I had not finished my middle school. I would now like to study Physical Education and continue to run professionally until I am 40 and then work at grassroots level and promote athletes in my hometown Penápolis. Brazil is a football nation, but we showed that other sports can also bring joy (to the country),” he added.

For Sunday’s race, he prepared for four months, including high altitude training camps in Paipa (Colombia) and San Luis Potosí (Mexico). He had entered Sunday’s race as the fastest in the field, thanks to his 2:11:32 for fourth at the Padova Marathon in April.

After a full week of action on the track at the brand new Telmex Stadium and on the streets of Guadalajara, the athletics tournament ended with 14 new Pan American Games and 29 national records, thanks largely to the city’s 1558m altitude.

With all its World Championships medallists from Daegu and other top starts like Olympic champion and world record holder Dayron Robles, Cuba dominated the medal tally with 18 gold, six silver and nine bronze medals, ahead of Brazil (10-6-7), the USA (4-8-4), Mexico (4-4-2), Colombia (3-5-9), Venezuela (2-1-2) and Guatemala (2-1-1). Twenty of the 39 nations contesting the athletics tournament achieved at least one medal.

All nine Daegu medallists entered here reached the podium. St Kitts' Kim Collins set a new Games record in 100m (10.00), but finished second in the final. Brazil’s Fabiana Murer, the only champion from the Korean city, lost her continental title to Cuba’s Yarisley Silva in a dramatic final.

Canada’s largest city, Toronto, will host the 17th edition in 2015.

The 2011 Pan American Games champions are as follows: 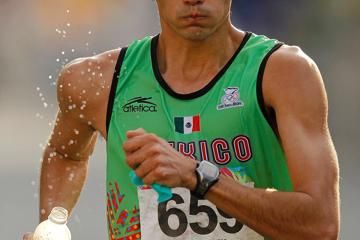