Saladino: ‘I have achieved the main thing - winning’

BeijingFour years ago in Athens Irving Saladino did not make it to the Olympic Long Jump final. He was a distant 36th in the qualifying round with a modest 7.42m leap. Or the other way round: he was sixth from the bottom of the table.

Now he came back to his second Olympics and took the gold medal. This comparison shows the development Saladino has made over the last couple of years.

“This is a dream come true,” he said.

Apart from his personal success Saladino also put Panama on the list of Olympic champions. So far the Central American nation had won two bronze medals in Olympic athletics events but no silver or gold. And only on four occassions so far has Panama recorded a top eight placing.

“I know about the significance of this Olympic medal, since there are not many such medals going to Central America,” Saladino said after his triumph. “And this is of course the first gold for Panama. I am extremely proud to have won this medal for the people in my country, because they have given me a lot of support. I have no idea what is happening back there right know. I heard there is a holiday now after this. They are partying. I will find out what is going on there once I get there. May be the president will do something to commemorate this medal.”

Saladino achieved his victory wearing two differently coloured shoes: the left one was blue, the right one red while the soles were white, symbolizing the colours of Panama. Additionally there was a small flag of his country on each of his shoe tabs.

Saladino had only three valid jumps in the competition and improved from second to fourth attempts, jumping 8.17m, 8.21m and 8.34m. South Africa’s Khotso Mokoena had taken the lead from him with 8.24m in round four, but Saladino responded immediately with the winning jump – but he still shook his head in anger, because he was not satisfied with the performance.

“I wanted more and I felt able to jump a personal best here,” said Saladino, who had stunned the athletics world early in the season when he jumped 8.73m with his first leap at the meeting in Hengelo in May, placing him seventh on the world alltime list.

“I came to Beijing being fit. That is why I had hoped to jump further. Then I had a difficult start in the competition because I felt a pain in my leg. I knew that I had to fight hard for this gold medal. In the end I have achieved the main thing - winning,” said the 25 year-old, who was born in Colon. “When I was young I was quite a naughty boy, playing baseball. My elder brother then took me with him to athletics. And that was how it all started – now I am sitting here.”

A year ago in Osaka Saladino had won the first gold for Panama at a World Championships.

“The Olympic gold is of course an even bigger medal for me. But the World Championships are also very important. And you really have to win them both, which I have now achieved. With these medals I hope to motivate youngsters in Central America to take up the sport so that one day we will get more medals in this region.”

He also dedicated the Olympic medal to Brazil. “It is half a Brazilian medal and half – or may be just a bit more than half – a Panamanian one.” That is because Saladino’s career got its decisive development in Brazil. After the Athens Olympics he moved to Brazil because he was then able to start training at the IAAF’s High Performance Training Center in Sao Paulo. Since then he improved from year to year: 8.29m in 2005, 8.56m in 2006, 8.57m in 2007 and now 8.73m so far.

“I am still living in Sao Paulo,” said Saladino, who likes surfing through the internet and watching movies in his spare time. “And I will stay there until the Olympic Games in London 2012. After these I plan to end my career.” 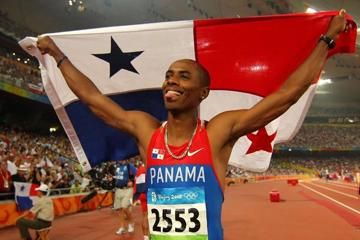 Saladino: ‘I have achieved the main thing - w...