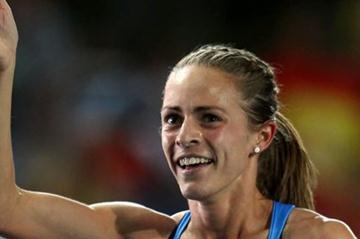 American Jenny Simpson, the former Jenny Barringer, may have won the world 1500m title in the slowest time in the history of the IAAF World Championships (4:05.40), but it mattered not.  The former NCAA star who ran for the University of Colorado had tonight become the first American woman to win the world 1500m crown since Mary Decker in 1983 in Helsinki, completing her transition from a steeplechaser to a middle distance runner.

Simpson's conversion had begun at the end of her NCAA career in 2009.  That year, she not only won the American title at the 3000m Steeplechase and finished fifth in the IAAF World Championships in Berlin in that discipline.  However, she also ran a world-class 3:59.90 personal best for 1500m just three weeks prior to winning her national steeplechase title.  That performance unleashed the thought that the middle distances might ultimately be her calling.

"I have really, really learned to love the mile," Simpson said last January before starting her indoor season.  "And, there's a depth of competition in the 1500 in the United States that really attracts and tempts me to go after it."

But Simpson, who is still the American record holder in the steeplechase with a 9:12.50 personal best, first had to overcome a serious injury last year which forced her to stop running entirely.  She enjoyed a brief season in 2010 where she competed just four times, before pain in her hip became unmanageable. After finishing third at the USA Outdoor Championships at 5000m in Des Moines in June, 2010, Simpson realized that she needed a real break in order to heal.

"The first thing I did was I took a lot of time off," she explained. "I left Des Moines and pretty much went straight back to the Olympic Training Center in Colorado Springs where I met with the doctors there. We did a really thorough analysis of what was going on and how we could proceed as far as rehab goes."

Shunning even pool running and anti-gravity treadmills, Simpson didn't run a step for weeks, she said. She gradually went into pool running, and low-impact rehabilitation exercises. She also planned her wedding and moved from Boulder to the Olympic Training Center in Colorado Springs and eventually into the house she now shares with husband Jason in Monument, Colorado, about 5 km from the Air Force Academy where her coach, Juli Benson, trains her. She wasn't running, but the rehabilitation process was keeping her very busy.

Simpson tried to keep her mind off of the accomplishments of other athletes as the European track season went on without her. As the summer ended, she focused even more on her wedding and honeymoon in St. Lucia, last October a place she called "really fun but a terrible place for running."

Her training began in earnest last November, and Simpson said that she has come into good form training with three men at the Air Force Academy.

"November and December have been really solid, week after week of logging the miles and putting in the workouts. I've been doing a lot of really good foundation work, and I mean by that a lot of aerobic runs, a lot of building up the mileage."

Simpson qualified for these championships by finishing second at the USA Outdoor Championships last June in Eugene.  Ironically, she had only run five 1500m races this outdoor season prior to coming to Daegu because she caught the flu in the middle of the summer.  But Simpson said she came into these championships well rested and that she thoroughly trusted coach Benson who said she was ready.  Her move to Benson from her University of Colorado coach, Mark Wetmore, had been controversial: many people thought she was making a mistake by leaving Boulder and coach Wetmore.

"Moving to Juli Henner (Benson) has been incredible," Simpson declared after her victory tonight.  "She's such a positive person.  She has only positive things to say to me, and she builds me up as a human being.  And, I think being around someone like that is such an edifying way to be an athlete.  She's a 1500-meter veteran herself, so having experience in my life has been an important part of my year."

Simpson also credited coach Wetmore for helping build her base before she became a professional.

"You know, coach Wetmore is such an incredible coach, and he built me up as a young athlete, and made me a very tough and strong and confident person.  He's the one who put a lot of miles in my legs and encouraged me in a lot of ways, and the way that he influenced me in college."

Simpson was quick to share the glory with her husband and coach Benson, saying "half this medal goes to my husband and half goes to Juli."  But she also said that thinking of her younger sister, Emily, who is serving in the U.S. Army gave her extra motivation.

"Standing on the starting line I was thinking about what this could mean for my life, what this could mean for my family," said Simpson, 25, who trains in Colorado Springs.  "My little sister is serving in the Army and I said, 'man, if I win gold I get to play that national anthem for her.'  Coming down the last 100 meters, I was thinking of my little sister.  Let's get that song playing."