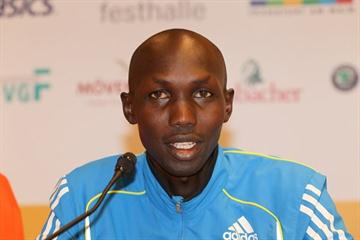 Wilson Kipsang obviously was in the focus of media interest after he propelled the Commerzbank Frankfurt Marathon into the group of the fastest marathons in the world last Sunday (31). Yet there were more records broken besides the Kenyan’s breathtaking 2:04:57 performance, which makes Frankfurt one of only four races with a sub 2:05 course record.

While Caroline Kilel (Kenya) improved the women’s course record to 2:23:25 there were also a record number of finishers: 9558 crossed the finish line in the indoor arena ‘Festhalle’. And next year it could get even better, because the race organisers meanwhile announced a new title sponsor deal: German premium car company BMW will be the new partner. The BMW Frankfurt Marathon will take place on 30 October 2011.

But for now the focus remains on Wilson Kipsang, who became the eighth fastest marathon runner in history. Life on the farm traditionally breeds rugged individuals, attuned to the mental and physical demands of sport, but Kipsang has a variation on that theme.

The career which has now propelled him to number three on this year’s world rankings for the marathon was not quite as straightforward as gaining strength and endurance from herding cattle.

‘Running’ was initially a hard sell for Kipsang

The 28-year-old Kipsang, like the former World record holder Paul Tergat before, did not have a long route to school which would lead to a handy 10k trot there and back, as has so often been the case for Kenyan schoolchildren.

Secondary school was within handy reach and while he did some running the occasional good result didn’t persuade him that here was his future.

Graduating from school at 18, he became a travelling salesman – not on foot – to farms far and wide. Three years into this new career and with precious little running done, he saw and read about Paul Tergat’s record breaking marathon run in Berlin in 2003.

That was the turning point: Kipsang felt inspired and began to train with a sense of purpose for the first time. At 21, time was on his side and he encountered a measure of success in local races although he kept the day job as farm salesman going.

Another key to his current success was when he met the man who became his manager: Gerard van de Veen. This was in 2007 and once they’d agreed on a partnership, Kipsang found himself heading for Germany – the land where his inspiration Tergat had enjoyed World record success – as a substitute for another of van de Veen’s runner who had dropped out injured.

The destination was the 10 Mile Jever Fun Lauf or Fun Run, sponsored by an alcohol-free beer manufacturer. To perhaps everyone’s surprise but his own, Kipsang not only won but set the world best for 2007 at the distance. More success on the road followed, including a highly impressive half marathon of 58:59 at the 2009 Ras Al Khaimah event.

Why not me for the World record?

His performance on the road in Frankfurt was impressive indeed but so was the way he conducted himself. There is always a measure of doubt about anyone who sounds so relaxed before a race, perhaps too relaxed? But Kipsang’s style of laid-back authority proved to have substance.

Both before and after his win, he was happy to consider how much faster he could run, building on his marathon debut of 2:07:10 for third place in Paris this April. It took some nerve to speculate: “When I look at others who have similar half marathon times to me and have run much faster than I have so far in the marathon, I think, why not me for the World record?”

Naturally enough, he was even stronger in his belief post-race, believing that a World record was possible in Frankfurt, a comment which had race director Jo Schindler and elite race co-ordinator Christoph Kopp checking their insurance policies for next year’s bonus money.

Investing in his future

He retains that business sense from the years spent travelling the Kenyan countryside, selling his wares to farmers. For Kipsang, running is his business now.

“When you go into something like running, you must concentrate mind and body and do it with all you have, that is the only way.”

As for the 95,000 Euros in prize and bonus money which he earned on Sunday, playing his part in manager Gerard van de Veen’s second double of the year in Germany after his athletes won both titles in Hamburg in April, Wilson Kipsang has already been making plans.

“I intend to invest the money in business when I go home. This will be my next career, once I have finished running.”

His 2:04:57 at the Commerzbank Frankfurt marathon would suggest his current employment has a long way to go before retirement.

Andy Edwards for the IAAF