Debbie Dunn improves to 50.86 at the US indoor champs (© Kirby Lee)

Albuquerque, USAWorld leading performances by Debbie Dunn, Terrence Trammell and Ivory Williams and another stellar dash by Carmelita Jeter highlighted the second and final day of the USA Indoor Championships at the Albuquerque Convention Center on Sunday (28 Feb.)

Jeter clocked a career best 7.02 in the 60m, the second fastest performance in the world this season.

Dunn, who had never run under 53 seconds indoors before this weekend, clocked 52.17 in the prelims and knocked more than a second off that to 50.86 in the final to move into fifth on the all-time U.S. performer list and win her first national title – indoors or outdoors.

“On a championship day like this, you never know what someone can offer,” Dunn said. “I just went out there and did the best that I could do and I am glad to come home with the win. Anything is possible when you are training to run fast.”

The final turned into a duel between Dunn and Dee Dee Trotter, who was the top qualifier in the prelims. Dunn seized the lead at the 150m break and held off a challenge from Trotter around the bend in the second lane for her second career best in as many days. Trotter was second in 51.23.

“The thing I wanted to do was get the break,” Dunn said. “I maintained and brought it home as hard and strong as I could.”

Trammell, who set the meet record of 7.37 in 2009, was never challenged in Sunday’s final and now has the season’s two fastest times. Trammell was the first over the first set of hurdles and extended his lead to finish over David Oliver (7.52) and Jeff Porter (7.62).

60m winner Williams: In Doha, ‘everybody is in trouble’

Williams entered the championships with the fastest time by an American this season and solidified it with his 6.49 win. Williams pulled away in the final 10 metres to beat 2008 champion Michael Rodgers (6.52), Trell Kimmons (6.56) and Walter Dix (6.58).

“I just came out here just ready to run,” Williams said. “I really didn’t try to worry about anything. I knew Mike Rodgers was going to run so I just tried to stay relaxed the whole race.”

The triumph gave Williams a sweep of the 2010 elite domestic circuit, adding to his wins at the Millrose Games and Reebok Boston Games, and high hopes for Doha as well.

“Doha? Everybody is in trouble,” Williams said. “That’s what that means. Real big trouble.”

Jeter hasn’t slowed down after her 10.64 in the 100m in the Shanghai Grand Prix last fall, a mark which elevated her into second on the all-time list.

Jeter ran a personal best 7.02, the second fastest behind the 6.97 by La Verne Jones-Ferrette (ISV). In all, Jeter now has three of the world’s top four times of 2010.

“It just means that I have to go back to the house and do a little more training and sharpening,” Jeter said. “My confidence is up but there is still someone who is running better than me.”

Jeter, 30, has brushed aside her breakthrough year in 2009 in pursuit of a World Indoor Championships gold medal in Doha.

“You have to work on a couple of things that you need to improve on,” Jeter said. “And that’s what you start with.”

In Sunday’s final, Jeter was in command by the halfway breaking into a smile 10 metres from the finish. Miki Barber was second in 7.15 and Gloria Asumnu was third in 7.18.

Powell takes down Jones in the Hurdles

Ginnie Powell appears to be free of the knee and hamstring injuries that slowed her the last two seasons. The 2006 and 2007 US outdoor champion outleaned reigning World indoor champion Lolo Jones 7.87 to 7.89, for her first Indoor national title and snap Jones’ three-year reign.

Former World champion indoors and outdoors Reese Hoffa finished fourth at 20.58m after fouling on three of his six throws.

Jillian Camarena won her sixth consecutive title in the women’s Shot Put with a throw of 18.63m. Michelle Carter, the daughter of 1984 Olympic Shot Put silver medallist Michael Carter, was second at 18.03m. The victory was an emotional one for Camarena, who dedicated the effort to her grandmother who recently passed away.

Brittney Reese will try to add a World indoor title to the one she claimed in Berlin last summer in the Long Jump after winning with a 6.89m leap in Albuquerque. Brianna Glenn snagged the second World team berth over 2008 Olympic Heptathlon silver medallist Hyleas Fountain, 6.78m to 6.70m.

Jeremy Hicks won the men’s Long Jump over Jeff Henderson with both jumpers registering marks of 7.94m. Hicks, however, was declared the victory on a better second mark after Henderson fouled on five of his six leaps.

In the women’s Pole Vault, Lacy Janson defeated 2009 World silver medallist Chelsea Johnson with a third attempt clearance of 4.65m. Johnson, who cleared 4.60m, took one attempt at 4.65m before passing on her final two tries.

In the women’s 1500m, Uceny pushed the pace in the women’s 1500m and then held off Shannon Rowbury to win 4:19.46 to 4:19.48. Neither Uceny nor Rowbury will represent the U.S. in Doha. Uceny has not attained the “A” standard while Rowbury said that she will like pass on Doha to instead prepare for the outdoor campaign. 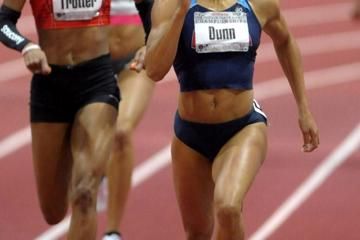