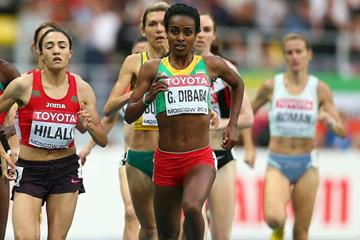 Gone are the days when Genzebe Dibaba’s form would take a dip during the outdoor season.

The Ethiopian has this year turned around her fortunes. No longer an indoor specialist, Dibaba’s outdoor performances this year have matched the incredible feats she has achieved on the boards during the winter.

Her most notable performance this year, of course, was her 1500m world record at the IAAF Diamond League meeting in Monaco. Significantly, she is undefeated across all distances this year, indoors and out, so she heads to Beijing with her confidence at an all-time high.

She will be doubling up with the 5000m in Beijing, but the 1500m comes first and doesn’t overlap with the longer event. The metric mile, though, has arguably a tougher field than the 5000m with six other women who have run faster than four minutes this year.

Top of that list is European champion Sifan Hassan. The Dutch runner doggedly stuck to Dibaba in Monaco until she finally came unstuck on the final lap, but was still rewarded with a personal best of 3:56.05.

More recently, she ran a solo 3:56.33 in a low-key mixed race in Langenthal and was disappointed as she had been targeting a time of 3:52. But that in itself shows that the 22-year-old is in great form.

The US duo of Shannon Rowbury and Jenny Simpson are also big medal threats. Rowbury took bronze at the 2009 World Championships and in Monaco this year she broke the North American record with 3:56.29.

Simpson, meanwhile, is the 2011 world champion and 2013 world silver medallist. The 28-year-old excels in the championship arena and could become just the second woman in history, after two-time world champion Hassiba Boulmerka, to win three medals in the 1500m at the World Championships.

Defending champion Abeba Aregawi struggled for form during the first half of the season, so she cut short her racing schedule in June. She is said to be back in good shape now, but the Swede might be lacking in sharpness when she comes up against a formidable field in Beijing.

Britain’s Laura Muir has set PBs at 800m, 1500m and 3000m this year. Before clocking a lifetime best of 3:58.66 in Monaco, she took a surprising victory at the IAAF Diamond League meeting in Oslo, where she was the only athlete to go with the pacemaker and held on to her lead right to the end.

World junior champion Dawit Seyaum will be one of the youngest athletes in the field. The 19-year-old Ethiopian successfully defended her African junior 1500m title earlier this year, so clearly does well in championship races, but Beijing will be her toughest test to date.

Kenya’s Faith Kipyegon finished fifth in Moscow two years ago while still a junior. Since then, she has gone on to win the Commonwealth title and earned her place on the team for Beijing by winning a competitive Kenyan Trials race.

If the final becomes a tactical race, expect to see the likes of the Netherlands’ Maureen Koster, Albania’s Luiza Gega and Morocco’s Rababe Arafi in the pack.