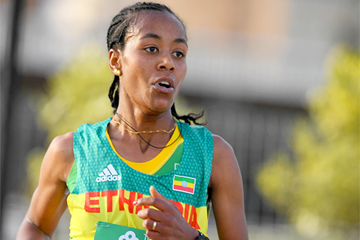 Three months after her world record run at the IAAF World Half Marathon Championships Valencia 2018, Ethiopian Netsanet Gudeta Kebede will be making her eagerly anticipated follow-up over the distance at the Mattoni Olomouc Half Marathon, an IAAF Gold Label road race, on Saturday (23).

Gudeta stormed to a 1:06:11 women’s-only race half marathon world record in the Spanish city on 24 March, winning by 43 seconds. She's competed only once since, a fourth place finish at the TCS World 10km in Bengaluru, India, on 27 May, where she clocked 31:53.

But her appearance will hardly be a stroll in the park.

Among the opposition assembled in this eastern Czech city of 100,000 is compatriot Aselefech Mergia, the world silver medallist over the distance in 2007 and world gold medallist in the marathon in 2009. She has a 1:07:21 best from 2011, and clocked 1:08:46 last year. Her best race this season came in New York in April where she finished second in the Healthy Kidney 10km in 32:06.

Kenya comes armed with Antonina Kwambai, perhaps her fiercest challenger this weekend, who notched an impressive victory at the Paris Half Marathon on 4 March in 1:08:07. That was the 26-year-old's second consecutive personal best this year, following her 1:09:07 run in Naples in February where she was second.

Her compatriot Penninah Kandie should also be considered another podium favourite. The 26-year-old has a 1:09:44 season's best, set in the fast Istanbul race on 8 April, not far from her 1:09:15 lifetime best set last September in Remich, Luxembourg, where she won by more than two minutes.

Others to watch include Clemence Calvin, who arrives on the heels of her 31:20 French national 10km record set in Langueux, France, last Saturday. That performance indicates that she's in far better form than her 1:11:17 personal best would indicate.

The men's race features four men with personal bests under one hour.

The fastest is Jemal Yimer, the 21-year-old Ethiopian who clocked his 59:00 lifetime best at this year's Ras Al Khaimah Half in February where he finished second. His performance remains the third fastest of 2018. He's also a strong big race performer, having registered fourth place finishes at both this year's World Half Marathon Championships at last year's World Cross Country Championships.

The remaining three sub-60 minute runners are all from Kenya. One is 23-year-old Kenyan Justus Kangogo, who clocked his 59:31 personal best at the Roma-Ostia Half Marathon last year. This season he's clocked 1:00:24 for seventh in early April's Prague Half Marathon.

Gilbert Masai, at 37 the veteran of the field, set his 59:31 lifetime best in Copenhagen two years ago. He'll arrive with a 1:00:16 season's best from the Venloop in Venlo, Netherlands, on 25 March.

Meanwhile, Stephen Kiprop, just 19, is a newcomer to the circuit who's made his presence felt immediately. He clocked his 59:44 personal best when winning the Venloop.

Others to keep an eye on include Meshack Kiprop Koech, who clocked 1:00:07 in Lille last Autumn, and 1:01:5 this year. Evans Cheruiyot, who clocked a 1:00:26 personal best in April, could also be a factor.