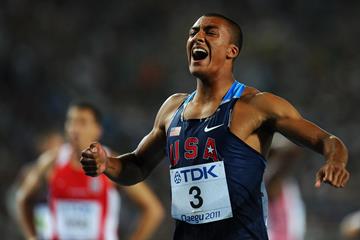 In 2012, Ashton Eaton broke the World record at the US Olympic Trials with a score of 9039 and went to the London 2012 Olympics Games as the outstanding favourite for the gold medal. This year, the 25-year-old only lies in 13th place on the world list but that decepetive position should not cover the fact that things have not changed at all.

The performances achieved by Eaton in individual events during his 2013 campaign clearly show that he should be able to score around 8800 points in Moscow with a decent round of results, despite only having a season's best of 8291 points from when he won the US title in Des Moines back in June.

The US athlete has set impressive personal bests in 2013 including 45.64 in the 400m, 15.40m in the Shot Put and 66.64m  in the. In his latest test, competing at the recent Estonian Championships, he showed excellent form with 13.72 in the 110m Hurdles and a 5.10m Pole Vault, both season's bests and clear evidence of his gold-medal form.

Eaton’s compatriot, the 2011 World champion and 2012 Olympic Games silver medallist Trey Hardee, did not finish his Decathlon at the US Championships and only completed three events there, but then he didn’t need to as he had a place on the plane assured thanks to his gold medal in Daegu.

The 29-year-old could become the third man in the history of the IAAF World Championships to win the Decathlon three times in a row having also won the 2009 title in Berlin. Former World record-holder and fellow US athlete Dan O'Brien won in 1991, 1993 and 1995 while Czech republic’s Tomas Dvorak was the champion in 1997, 1999 and 2001.

The Texan however has a difficult job in front of him as his season has been a difficult one. He was in good form indoors winning a bronze medal in the 60m Hurdles at the US Indoor Championships, but didn't finish the Heptathlon there and has only competed once during the outdoor season, in his aborted Decathlon in Des Moines.

The third medallist from London is going to Moscow having not even started a Decathlon in 2013. Cuba’s 25-year-old Leonel Suarez has won a medal in four straight major outdoor championships with a bronze at both the last two Olympic Games and a silver at the 2009 World Championships followed by a bronze two years ago in Daegu.

He has competed sparsely before major championships in the past but this season he has only competed in one Javelin competition so there are no guarantees about whether he will be in shape to compete seriously for an unprecedented fifth straight medal at a global championship.

In fact, only one athlete has exceeded 8500 points this year, Germany’s reigning European champion Pascal Behrenbruch.

The 28-year-old scored 8514 points to win in Ratingen in June and that, combined with his 8558 points and gold medal in Helsinki last summer, makes him a top medal contender in Moscow.

Behind Behrenbruch on the 2013 world list it is currently very tight. Two more Germans follow in close order with Rico Freimuth having scored 8488 points and Michael Schrader 8427 points.

Both are in good form and have to be considered as outside medal favourites as the health situation with some of the top decathletes is not completely clear.

Brazil’s Carlos Chinin is also in the mix having set a South American record of 8393 points this season and Canada’s Gotzis winner Damian Warner has shown good form in 2013 to back up his fifth place personal best score of 8442 points in London last summer.

Dutchman Eelco Sintnicolaas has also been showing good form lately. The Pole Vault specialist has set personal bests in the 110m Hurdles and Discus and scored 8322 points for an easy win at the European Cup First League.

France’s 21-year-old Kevin Mayer had a disappointing outing in London, only finishing in 15th place, but things have gone well for him in 2013 and he has done well in major competitions with a silver medal at the European Athletics Indoor Championships Heptathlon and a 8390 points win at the European Cup Super League in Tallinn.

Another name to consider as well is 2008 Olympic Games silver medallist Andrei Krauchanka. After injury problems last summer, the Belarusian is coming back to his best form and scored 8390 points in May, his best tally since Beijing five years ago.