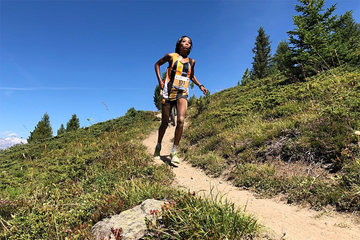 World champion Lucy Wambui Murigi and her Kenyan compatriot Geoffrey Gikuni will start as favourites at the 45th edition of the International Hochfelln Mountain Race, the penultimate stop of the 2018 WMRA World Cup, in Bergen, Germany, on Sunday (30).

Murigi, the recently-crowned world champion and winner in the Sierre-Zinal race, will make her first appearance at this race. At last year’s World Championships in Premana, Italy, she won her first world title getting the better of seven-time world champion Andrea Mayr of Austria. Mayr didn’t wait long to get revenge, taking nearly four minutes out of the Kenyan at the Kitzbüheler Horn Race a few weeks later. The pair will battle it out again at Hochfelln this year, with eight-time winner Mayr looking to avenge her defeat at the 2018 World Championships in Andorra two weeks ago.

In the men’s field Murigi’s “run2gether” teammate Gikuni will be looking for another victory to add to his 2018 wins at Grossglockner and Schlickeralm.

The 2017 World Long Distance champion Francesco Puppi from Italy, seventh at this year’s World Championships ahead of the Kenyan, will also be aiming for the top step of the podium in Bergen. The top German athlete is likely to be last year’s runner-up Toni Palzer from Ramsau/Berchtesgaden. A last minute entry by Italian twins Martin and Bernard Dematteis will spice things up on the men's side making this one of the strongest Hochfellnberglauf races ever.