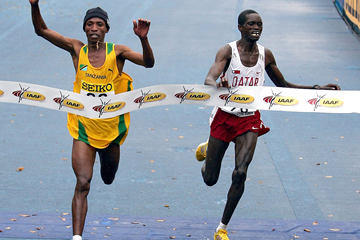 Mention Nigeria in athletics terms, and the inevitable reference is world class sprinting. Indeed the whole coastline of West Africa, from Senegal down to Namibia is to sprinting what East Africa, from Somalia to Kenya, and indeed South Africa is to long distance running. Yet the advent of the MTN Lagos Half-Marathon three years ago has attracted increasing numbers of local runners, from fewer than 15,000 in 2002 to over 30,000 entries for Saturday’s fourth edition of the race (19 Nov). And at the sharp end, William Eku finished in the top-ten last year.

It goes without saying that this is the biggest such event in sub-Saharan West Africa, and is probably only rivalled on the whole continent by events such as the long established Comrades Marathon and Two Oceans Race in South Africa, and the newly forged Great Ethiopian Run in Addis Ababa.

Saturday’s Lagos race, organised by the Athletics Federation of Nigeria (AFN) should only extend the reputation of the event, since, in addition to Fabiano Joseph of Tanzania, winner of the recent World Half Marathon Championships race, there are also three other men from the top-ten in Edmonton six weeks ago.

Joseph, still only 19-years-old has special reason to want to add this event to his mounting list of victories, since the inaugural race three years ago was also his first international outing, when he finished third as a 16-year-old schoolboy. But Joseph is likely to find the opposition here just as strong as in Edmonton.

Principal opponent is defending champion, John Korir of Kenya who set the course record of 63:05 in winning last year. The slowish time, incidentally is the result of high humidity in this coastal city, even at the 8am start time, and more so at the finish just over an hour later. Korir was also sixth in the Olympic 10,000 metres in Athens. The Kenyan was not originally sure he could come to defend his title, following a late track season injury. But when he won a cross country race in Nyahururu three weeks ago that he had only intended as an exercise to gauge his fitness, he immediately booked his ticket for Lagos.

The other trio from the ‘World Half’ top ten are Yonas Kifle of Eritrea (third in Edmonton), John Yuda, Joseph’s training partner from Arusha (6th) and Norman Dlomo of South Africa(10th). But two relative Kenyan newcomers could pose problems for the top four, if their recent performances are any indicator. And if the times and distances were correct! Paul Rugut won the Delhi Half Marathon in 61.55 a month ago, in the sort of conditions expected here; and Charles Kiama clocked 61.34 to win the Nairobi Half Marathon, at altitude!

The women’s race is not yet up to the same standard, so Rita Jeptoo, 7th in the World Marathon Championship in Helsinki should be too strong for Farida Makula of Tanzania (74.12 in L’Humarathon, Paris) and Tina Maria Ramos, who won the Stockholm Marathon.