The capacity crowd in Addis Ababa were brought to their feet when Ethiopia’s Yomif Kejelcha and Etagegn Woldu won gold in the 5000m finals during the closing two days of the African Junior Championships, which concluded on Sunday (8).

But Nigeria’s dominance in the sprints – including a championship record in the women’s 4x100m – also proved to be a major highlight as the west African nation topped the medals table at the end of the four-day championships with 12 gold medals.

Hosts Ethiopia finished third on the medals table, one place behind South Africa. Somewhat surprisingly, Kenya only finished fifth in the table after winning gold in the men’s 800m and women’s 3000m.

Nigeria has faith in Praise and Divine

Having won the 100m earlier in the week, world junior 200m silver medallist Divine Oduduru successfully defended his 200m title. He clocked 21.22 into a still -2.3m/s headwind, having earlier won his semi-final in 20.86.

In between the rounds, he also ran the anchor leg on the triumphant Nigerian 4x100m team, winning by almost a second in 39.99.

Team-mate Ese Brume matched Oduduru’s achievements by taking three gold medals. Following on from her triple jump victory and 100m bronze, she anchored Nigeria to gold in the 4x100m in a championship record of 44.83.

One day later, the senior African and Commonwealth champion took gold in her specialist event, the long jump, with another championship record, winning with 6.33m.

Praise Idamadudu was another multiple medallist for Nigeria. She overcame Ethiopia’s Tigist Tamagnu to take victory in the women’s 200m in 23.76 on Sunday afternoon and returned to action in the 4x400m relay two hours later as Nigeria comfortably beat Ethiopia.

At major championships, nothing can invigorate the crowd quite like host nation success. Spectators at the Addis Ababa stadium were in full voice celebrating three gold medals in the final two days of action.

The women’s 5000m was a rematch of last year’s world junior 3000m final with Kenya’s bronze medallist Valentine Mateiko battling with Ethiopia’s Etagegne Woldu, who finished fifth on that occasion.

After a conservative opening six laps, Woldu made the first move to the front, but was quickly closed down by a leading pack consisting of compatriot Sintayehu Lewetegne, Mateiko, and Ugandan Stella Chesang, the fourth-place finisher over the 5000m in Eugene.

The pack held on together until 300m from the finish when Woldu started her kick. Lewetegn, Chesang, Mateiko and Chebet all gave chase, but none was able to stop the Ethiopian at the finish, which she reached in 17:02.71. Lewetegne won the battle for second in 17:03.87 ahead of Chesang who took home bronze.

“The initial race plan on home soil was to run fast laps, but we couldn’t do that due to the wind,” said Woldu. “So we opted to remain behind and to kick on the last lap. We delivered on our aim. The home crowd’s loud support was overwhelming.”

The home support also spurred on Kejelcha, the world youth, world junior and Youth Olympic champion. Hitting the front two laps from the finish in the men’s 5000m, Kejelecha was in complete control as he outsprinted Kenyan duo Fredrick Kiptoo and Daniel Kipkemoi to take the honuors in 14:31.03.

“It is another big win for me,” said the 17-year-old. “When I heard the local media talking about the previous four gold medals won by women athletes, I was a bit scared not to lose. So I am happy about delivering gold and the big support from the fans throughout the race was amazing.”

Pre-race favourite and national junior record-holder Dawit Seyaum did not disappoint in the 1500m. The world junior champion kicked at the bell and held on for a comfortable victory ahead of Besu Sado and Kenyan Iveen Chepkemoi.

Kenya had been relatively quiet on the medal front in the opening two days, but gold medal performances by Patrick Kiprotich in the men’s 800m and Stella Jepkosgei in the women’s 3000m steeplechase saw them climb up to fifth in the medal standings. 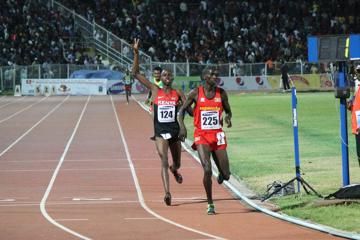