Aiyabei clocked 2:24:28, a personal best by 38 seconds and the fastest ever women's performance on Spanish soil. Aiyabei also won the Barcelona Marathon in March, setting the previous Spanish all-comers’ record of 2:25:26.

The men's contest witnessed a surprise victory by the unheralded Kipchirchir, who clocked a massive career best of 2:07:39.

Paced by Kenneth Kiplagat Tarus, Aiyabei set out well inside her PB from the gun, covering the opening five kilometres in 16:52, some 12 seconds ahead of a triumvirate made up of compatriot Nany Kiprop and the Ethiopian pair of Bethlehem Moges Cherenet and Aberu Mekuria. Surprisingly, last year’s victor Beata Naigambo of Namibia was already running 27 seconds behind.

The 10-kilometre point was reached in 34:03 with the Ethiopian pair and Kiprop briefly joining Aiyabei at the front. But Aiyabei broke away with ease shortly afterwards to reach the halfway point in a promising 1:11:11, signaling that a course record was well within reach. Behind her, Kiprop still ran relatively close, some 18 seconds behind while Cherenet and Mekuria were more than a minute adrift.

Hampered only by some slightly uphill kilometres just before the 30-kilometre mark, Aiyabei maintained her relentless rhythm over the second half, her victory never in jeopardy. By 35 kilometres (1:59:38), running 24 seconds clear of Kiprop, a course record was in the cards.

Even at this late stage of the race, the rabbit Tarus was still helping with the pace. And Aiyabei didn’t falter over the closing kilometres, romping home with a smile on her face en route to her 2:24:28, a time just outside the year’s top-25.

"I'm really grateful to my manager, coach and organisers as they all have let me set my best performance and course record," said Aiyabei, whose 2016 season also included a 1:09:33 lifetime best in the half marathon.

Boosted by no fewer than three pacemakers, the men’s opening splits were quite fast with the large lead group going through the five and 10-kilometre points in 14:47 and 29:45 respectively. By then, all the contenders were Africans except for European cross-country legend Sergiy Lebid of Ukraine, now 41, who ran at the back of the group. Two kilometres later the first notable athlete to fall back was Kenyan Geoffrey Mutai, a 2:04:15 performer back in 2012.

Successive splits of 44:49 by the 15th kilometre mark and 1:02:31 at halfway suggested a winning time well inside the 2:06:13 course record set last year by John Mwangangi. Unceremoniously, he was among the next to drift back, falling out of contention some 26 kilometres into the race.

Kipchirchir led the field through 30 kilometres in 1:29:13, which at this point was reduced to a chase pack of three: Kenyans Peter Kirui, Matthew Kisorio and Geoffrey Yegon with Mwangangi another 12 second behind.

Kipchirchir, who arrived in Valencia with a somewhat modest best of 2:09:13 time, proved to be the strongest on the day, sealing the win with a move precisely at the 40-kilometre mark where he managed to shake both Yegon and Kirui.

A sluggish 31:26 split between kilometres 30 and 40 put paid to a course record assault, but he nonetheless managed to increase Kenya’s stranglehold on the event crown with his 2:07:39 run.

"I have beaten my PB and won the race so I can't ask for more," said the winner, who will celebrate his 29th birthday on 5 December.

This was Kipchirchir's second marathon victory of the year, after his win in Santiago, Chile, in April, where he clocked 2:11:01. "I liked Valencia's course and people. I hope to come back next year."

Mwangangi regrouped in the closing stages to finish fourth in 2:08:31 while Kisorio, fading badly in the waning stages, finished a distant ninth in 2:13:27.

The event was held under agreeable weather conditions, with temperatures hovering about 14C at the start of the race with a relatively low humidity of 56 percent. 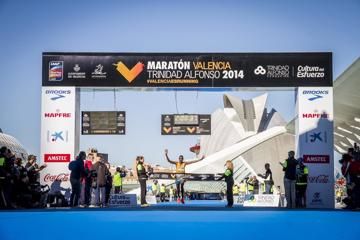 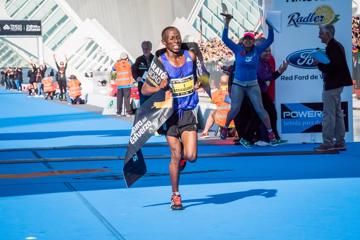