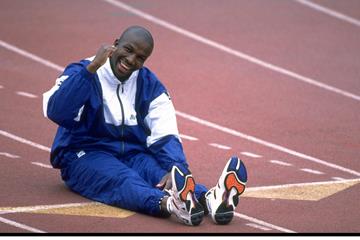 Bailey's back - another narrow miss for El Guerrouj

The Canadian won the100m in 10.02 on a damp evening, ahead of Ato Boldon (10.10) of Trinidad & Tobago and Namibian Frank Fredericks (10.11), with World Champion Maurice Greene (USA) only 8th with a disappointing 10.38. Bailey led the race from 40 meters and looked the winner every stride of the way.

After his phenomenal 1500m world record in Rome, Morocco’s Hicham El Guerrouj made another attempt at Noureddine Morceli's world record in the mile, but the pace was too fast in the early stages and he paid the price in the last meters, still managing to finish in 3: 49.02 which still is the second best performance of 1998 after his near-record in Nice.

There may have been no records, but the Paris meeting was brightened by two seasonal world best performances in the women's 5000m and 400m hurdles by Gabriela Szabo and Kim Batten, respectively. Rumanian Szabo, after a thrilling head-to-head with Moroccan Zahra Ouaziz, accelerated in the final 250 meters leaving her rival well behind. Her time (8:24.32) betters the seasonal best set by Ouaziz herself.

"I tried to break the European record, but I did not succeed. Maybe I shall make it the next time", said Szabo after the race. American Kim Batten did the same winning the women's 400 hurdles, ahead of Jamaican Deon Hemmings and Moroccan Nezha Bidouane, in 53.06, improving the previous seasonal world best, which also belonged to her.

American star Marion Jones was true to form, winning both the 100m, ahead of Christine Arron (FRA), and the long jump. Her time (10.88) was "only" the 9th best of 1998 - behind the eight other fastest marks set by... herself. She then jumped 6.97 metres to win the long jump: five centimetres better than Italian Fiona May.

In the other Grand Prix events, in the men's 400m American Alvin Harrison (44.91) beat by a hundredth of second his countryman Antonio Pettigrew; Ken Harden (ZIM) won the 400 hurdles ahead of Russian Ruslan Mashchenko and World Champion Stéphane Diagana who failed in the final meters; Kenyan Daniel Komen was first in the 3000 metres (7:32.55) in a solitary race preceding his compatriot Kipkosgei; American John Godina (21.51) and Jeff Hartwig won the shot put and the pole vault (5.78), respectively, and Russian Sergei Klyugin the high jump; Norwegian Trine Hattestad had an easy win (66.09) in the javelin.