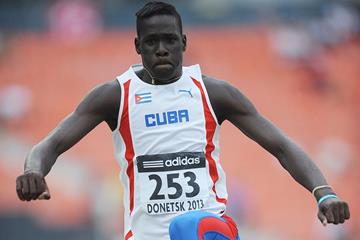 The action came thick and fast on the penultimate evening session at the 2013 IAAF World Youth Championships, as Lazaro Martinez’s championship record-equalling leap in the Triple Jump was one of several highlights.

The lead changed hands in each of the first four rounds. Much to the delight of the home crowd, Ukraine’s Oleksandr Malosilov opened with a PB of 15.95m, but his lead was soon taken by Germany’s Dimitri Antonov, who also set a PB with 16.02m.

In round three it was the turn of China’s Fang Yaoqing to move into first place, which he did with 16.48m – also a lifetime best.

Martinez continued the trend of lead-snatching PB performances in round four, leaping 16.63m to move into the gold medal position.

The places remained the same in the final two rounds as Martinez was confirmed the champion, having equalled the championship record set in 2005 by compatriot Hector Fuentes. Fang won his second silver medal of the week, having won the same colour medal in the Long Jump.

While Jamaica is currently very much considered to be a sprint nation, it looks as though the future generation will be one of hurdlers as Marvin Williams won his country’s third gold medal of the championships over the barriers.

The boys’ 400m hurdles was a dramatic final. Marvin Williams was neck-and-neck with fellow Jamaican Okeen Williams over the first 300m, but Okeen hit the penultimate hurdle and crashed to the ground. One barrier earlier, Kenya’s Geofrey Cheruiyot – who was in a medal position – also fell over after clattering the eighth hurdle.

Marvin Williams forged ahead to the finish line, winning in a world youth-leading 50.39, bettering the national youth record that had been set by Okeen Williams in the semifinal.

Then, in the most moving moment of the championships, Marvin doubled back and walked up the home straight to hug Okeen Williams. The pair are best friends, class-mates, and training partners. And although they – and their coach – share a surname, they are not related to one another.

China’s Wang Yang took silver in 50.78 from USA’s Kenneth Silmon, 51.30. Silmon’s team-mate Marlon Humphrey, the world youth-leader heading into Donetsk, was a non-started in the final.

The girls’ 400m hurdles final went to form as Helene Swanepoel improved her own world youth-leading performance to win gold in 58.08.

In doing so, she becomes the first South African girl to win gold in a girls’ sprint event at the World Youth Championships.

In second, Tia-Adana Belle broke her PB for the third time this week to win silver for Barbados in 58.42. Lisa-Marie Jacoby won the battle of the Germans to take bronze in 58.75, edging out team-mate Eileen Demes (58.92) as the top four athletes set PBs.

His pace over the first 400m was faster than David Rudisha’s split en route to winning Olympic gold last year, but somehow Kenya’s Alfred Kipketer managed to hold on to take gold in the boys’ 800m.

After shooting into the lead to reach 200m in 23.28 and 400m in 48.63, Kipketer’s team-mate Patrick Ronoh and Ethiopian duo Mamush Lencha and Abrahaley Tadesse had tried to go with him. But as the challengers began to fade, Kipketer maintained his lead.

Britain’s Kyle Langford made a late charge over the final 100m, but a well-timed finish by Konstantin Tolokonnikov saw the Russian come through for silver.

The race plan of the winner in the girls’ 1500m was somewhat more conservative. Ethiopian favourite Tigist Gashaw hit the front with a lap to go and kicked ahead of long-time leader Bobby Clay of Great Britain.

After setting PBs in the first two events of the day, Germany’s Celina Leffler went into the final event, the 800m, with an unassailable lead in the Heptathlon.

Sweden’s Emma Stenlof, who had been in second place since the first event, held on to the silver medal with 5590, but the biggest surprise came from Leffler’s team-mate, Louisa Grauvogel, who smashed her 800m PB with 2:19.26 to move up two places in the overall standings to take bronze with 5581.

Australian duo Aliyah Johnson (5547) and Alysha Burnett (5505) were pushed out of the medals. With her chances of a medal having all but disappeared after a difficult morning session, Britain’s overnight leader Morgan Lake was a non-starter for the 800m.

Leffler’s 5747 is the best ever score with the new-specification youth heptathlon with the 76cm hurdles, 3kg Shot and 500g Javelin, so is effectively a World youth best. But it should be noted that Tatyana Chernova scored 5991 with the ‘previous’ youth heptathlon and China’s Shen Shengfei scored 6185 with the senior heptathlon.

The gold and silver medals won by Hungarian pair Reka Gyuratz and Helga Volgyi in the girls’ Hammer came as no shock, but Ukraine welcomed the surprise bronze medal won by Valeriia Semenkova as the host nation won their first medal of the championships.

Reka Gyuratz, holder of the World youth best for the new 3kg implement, opened with 70.90m while team-mate Helga Volgyi’s first valid mark came in round two with 70.81m. Gyuratz then improved to 73.20m with her second throw, Semenkova threw 67.55m in that round to move into third.

In round three Volgyi threw 71.95m, then neither she nor her compatriot improved for the rest of the competition. Semenkova, however, bettered her PB with 68.62m in round four – just enough to hold off the sixth-round challenge from Norway’s Beatrice Llano, who ended her series with 68.31m to finish fourth.

Favourites Peinado and Denny take golds on the field

Australia’s Matthew Denny left the RSC Olimpiskiy Stadium slightly disappointed last night after taking bronze in the Hammer, having gone into the final as the top-ranked thrower.

But tonight he left the infield with a much bigger smile on his face, having won his best event, the Discus.

Germany’s Henning Prufer led for the first half, opening up with a 65.62m throw. But Denny took the lead in round four with a PB of 67.54m, bettering his own world youth lead. Prufer was unable to improve on his first-round throw and – as was the case in the Shot – had to settle for the silver medal.

Like Denny, Venezuelan pole vaulter Robeilys Peinado had to contend with the weight of expectation that goes with being the top-ranked athlete in the world in her event.

But Peinado – who was also the youngest in the final at just 15 – had to wait until later in the competition to take the lead as Russia’s Alena Lutkovskaya had a clean score sheet through to 4.15m.

Peinado then went clear at 4.20m and 4.25m at the first time of asking, while Lutkovskaya failed once at each of those heights, followed by another miss at 4.30m. Having been declared the winner, Peinado went on to attempt 4.30m and 4.36m but had to settle with a best of 4.25m.

Five other athletes cleared 4.05m, but Latvia’s Krista Obizajeva had the best count-back record and took the bronze medal.

In the other vertical jumps final of the night, the boys’ High Jump final, Sanghyweok Woo took gold for Korea, winning his country’s second ever title in the history of the World Youth Championships.

Four athletes had a clean card through to 2.11m, but Woo wasn’t one of them. He then moved into second with his first-time clearance at 2.16m but still trailed Jamaica’s world youth leader Christoff Bryan.

Woo then cleared 2.18m at the first time of asking to move into the lead, while Bryan failed three times at that height. China’s Bai Jaixue cleared that height to set a PB and move into second, but Woo went one higher to jump 2.20m, a lifetime best and good enough for gold.

100m medallists through to 200m final

The minor medallists from the 100m, USA’s Ariana Washington and Ecuador’s Angela Tenorio, were drawn in the same 200m semifinal and both athletes unsurprisingly grabbed the two automatic qualifying spots. Washington came within 0.01 of her PB with 23.19, while Tenorio clocked 23.35.

Sweden’s Irene Ekelund won her heat in 23.56, despite having to run into a -3.1m/s headwind. Germany’s Gina Luckenkemper won the other semifinal in 23.72.

Similarly, two of the medallists from the boys’ shorter sprint were also drawn in the same 200m semifinal, as 100m champion Mo Youxue of China was up against bronze medallist Reynier Mena of Cuba. The pair both qualified to the final with Mena taking the win in 21.38 from Mo’s 21.59.

Britain’s Thomas Somers was the fastest of the evening with his 21.05 PB in the first semifinal, while Jamaica’s Michael O’Hara also advanced with his 21.17 semifinal win. As was the case in the 100m, no US sprinters made it to the 200m final.