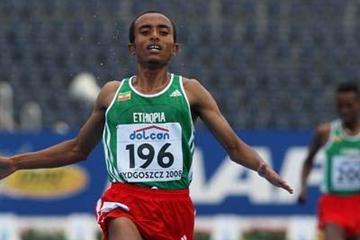 Abreham Cherkos of Ethiopia obliterated the 5000m championship record and the USA enjoyed more relay joy as the curtain came down on the 12th IAAF World Junior Championships in Bydgoszcz, Poland in front of more than 12,000 spectators in the Zawisza Stadium.

A heavy shower made life difficult for the competitors in the early part of the final session but the rain had abated by the time the 16 finalists set out on their 12-and-a-half-lap test in the men’s 5000m.

Ethiopia have generally had to play second fiddle to their arch distance running rivals for much of the championships but ended the final day on a high as Cherkos, the world junior leader, hacked almost 20 seconds from the championship record to win gold in 13:08.58.

Cherkos, who is ranked sixth on the all-time world junior lists with 12:54.19 in 2006, bided his time and preferred to sit in behind Kenya’s Matthew Kipkoech Kisorio, who set a ferocious pace.

Running on a wet track after an earlier downpour, the diminutive Cherkos hit the front with just over a lap to go and accelerated clear in the final 200m to score a resounding victory. Kisorio held off a late challenge from the second string Ethiopian Dejan Gebremeskel to take silver in a personal best of 13:11.57. Gebremeskel – four tenths further back – won bronze.

All three medallists were all below the former Championship record mark of 13:28.30 set by Hillary Chenonge of Kenya in 2002.

Cherkos, who has been selected to compete at the Beijing Olympics, was relieved to win pull of race victory as pre-event favourite.

“I expected to win, since I had the best PB and I was in good shape,” said Cherkos. But you never know with Kenyans, they are always dangerous.”

Easy win for Shabanov too!

Konstantin Shabanov blitzed to a new personal best and World junior lead of 13.27 on the same track where his father, Georgiy, won a bronze medal at the 1979 European Junior Championships.

The Russian, who led the World junior rankings coming into the event, produced a textbook piece of fluent hurdling to prove he could deliver on the big occasion.

Running from lane eight Jamaica’s Keiron Stewart challenged Shabanov mid-race but he lost his rhythm after clipping hurdles nine and ten. The Russian simply powered ahead over the final two barriers with US junior champion Booker Nunley recovering from a sluggish start to take silver in 13.45.

In a close race for bronze Stewart was given the verdict in a photo-finish with Sami Ahmed Al-Hayder of Saudi Arabia. Both clocked 13.51 – the latter in an area junior record.

Great Britain picked up its first gold of the championships as Stephanie Twell burst clear with an impressive last lap performance to take victory in the women’s 1500m.

After what had been a pedestrian early pace, Twell appeared to clash with Asmerawork Bekele at the bell and the Ethiopian lost her shoe and was forced to step onto the in field.

Twell, a two-time European Junior cross country, then swept past Kalkidan Gezehegne down the back straight and kicked away for an emphatic victory in 4:15.09. Gezehegne had to settle for the silver in 4:16.58 with Great Britain’s Emma Pallant, who is the same training group as Twell, taking bronze in 4:17.06.

An elated Twell said: “I am very happy. Being a Junior World champion – it feels really great. I came here to win and I did it. Rain that fell down before the competition cooled the track down, so it wasn’t as hot as a few days ago.”

In the first track event of the final session, Kenya’s Jonathan Muia Ndiku won a thrilling men’s 3000m steeplechase as he hunted and chased down long-time leader Benjamin Kiplagat of Uganda to win in a personal best of 8:17.28.

Kiplagat, the world leader, burst to the front from the gun and covered the first 1000m in 2:34.51. At one stage he held a 40m lead but as fatigue started to kick in Ndiku began to reel the long-time leader in.

The Kenyan teenager finally caught and passed the fading Kiplagat at the final water barrier before kicking on to maintain his country’s 100 per cent record of having won every single men’s 3000m steeplechase at the World Junior Championships.

Kiplagat at least had the consolation of winning silver in 8:19.24, although he conceded his early pace may have been ill-judged.

“I was probably running too fast and then I had less power to win.”

Kenya’s Patrick Kipyegon Terer was the bronze medallist in a personal best of 8:25.14.

In the men’s high jump Bohdan Bondarenko of the Ukraine showed rich promise when winning bronze at the 2006 World Junior Championships in Beijing and went two places better to break the hearts of the Polish crowd and home hopeful Sylwester Bednarek.

Bondarenko’s first time clearance at 2.26m, which bettered his own World junior lead mark by 0.01, was enough to clinch victory.

He was pushed all the way by Bednarak who came agonisingly close to clearing 2.28m with his final two attempt but had to settle for silver. Miguel Angel Sancho of Spain was the bronze medallist with 2.21m.

China maintained its stranglehold in the women’s discus at the World Junior Championships as Shangxue Xi earned her country a sixth gold medal in this event at the last seven editions of the championship.

Xi, the Asian Junior champion, hurled the discus out to 54.96m with her third attempt to secure gold. Germany’s Julia Fischer, the girlfriend of David Storl the gold medallist in the men’s shot, collected silver after her second round attempt of 54.69m.

All relays go to USA

The USA completed the ‘Grand Slam’ of all four relay golds as they cruised to victory in both long relays on the final day.

In the women’s 4x400m the quartet of Lanie Whittaker, Jessica Beard, Erica Alexander and Takecia Jameson, the gold medallist in the 400m hurdles, stormed to a fourth successive US win in the event in 3:30.19.

In a terrific scrap for the silver the Ukrainian quartet set a national junior record of 3:34.20 to hold off the challenge of bronze medallists Australia by 0.03.

Great Britain, who enjoyed a strong final day of the championships, won silver in 3.05.82 with Germany taking bronze in 3:06.47.