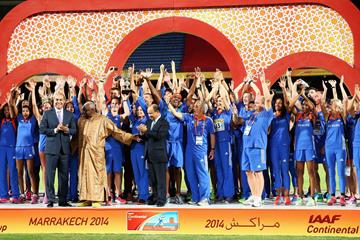 They won the first and last events of the weekend, but in between those victories hosts Africa could not hold off the might of the two strongest teams in the IAAF Continental Cup as Europe lifted the team trophy at the end of two days of competition in Marrakech.

Europe had a comfortable lead overnight, which they extended on the second day after winning half of the 20 events.

But the best event of the day was arguably the women’s 100m hurdles.

Having recently won the Diamond Race, Dawn Harper Nelson of the Americas lined up in Marrakech as the big favourite. European champion Tiffany Porter pushed her all the way, but the 2008 Olympic champion had the edge at the end, winning in a championship record and African all-comers’ record of 12.47.

In second, Porter also dipped below both of the previous records with her time of 12.51, breaking Jessica Ennis-Hill’s British record in the process.

Europe’s Cindy Roleder placed third in 13.02 with Lavonne Idlette of the Americas in fourth as the top two teams both bagged 13 points.

That set the tone for much of the rest of the day as Europe extended their lead with Americas in second, always a safe distance ahead of Africa.

The European team bagged the full eight points in several events on the second day thanks to a handful of their continental champions.

Sergey Shubenkov held off a strong challenge from Americas’ Ronnie Ash and Europe’s William Sharman to win the 110m hurdles in 13.23. Both Ash and Sharman were given 13.25 with the former given second place.

Double European sprint champion Dafne Schippers rebounded after finishing third at the IAAF Diamond League final. This time the Dutch heptathlete had a lead off the bend and maintained it until the end, winning in 22.28, her second-fastest time ever.

Joanna Atkins of the Americas was second with 22.53 and Schippers’ team-mate Myriam Soumare was third in 22.58.

European champion Christina Schwanitz benefitted from the non-appearance of defending champion Valerie Adams in the shot put, winning with 20.02m. All of the German’s attempts would have been enough to win after Adams withdrew, having suffered an adverse reaction from a pain-killer injection earlier in the day.

Michelle Carter, representing the Americas, was second with a season’s best of 19.84m as Gong Lijiao was 61cm further back in third.

By the end of the first round, it was clear that the men’s triple jump was going to be an exciting contest.

African and Commonwealth champion Godfrey Mokoena took an early lead with 17.13m as Will Claye responded with 16.87m. But European champion Benjamin Compaore usurped both with his first-round leap of 17.26m.

Mokoena regained the lead in the second round with an African record of 17.35m, only for Compaore to retaliate with a PB of 17.48m, the best ever triple jump mark on African soil. Claye, representing the Americas, also improved with 17.20m.

Compaore and Mokoena didn’t improve with their final two jumps, but Claye rounded out a consistent series with leaps of 17.21m and 17.18m.

Win but no world record for Wlodarczyk

After breaking the hammer world record in Berlin two weeks ago, European champion Anita Wlodarczyk said she was in shape to break the 80-metre barrier. But in the absence of some of her toughest rivals to push her to such distances, the Pole settled for a comfortable 75.21m victory.

Her winning throw was just eight centimetres shy of the championship record and her winning margin of 2.83m was the biggest ever in the history of the event.

Fellow world record-holder Renaud Lavillenie was similarly successful in the pole vault without needing to produce one of his best ever marks. The European champion went straight into the lead with his opening height of 5.65m as just two of his opponents were left.

In third, defending champion Bernard Lagat, competing 12 years after making his debut in this competition, secured six points for the Americas with 7:53.95.

Ndiku now ends the year as the only athlete in the world to have won titles at the World Indoor Championships, a continental championships, the Diamond Race and the Continental Cup.

Africa gained the maximum 15 points in the women’s 5000m. Competing on the same track on which she destroyed a quality field to win the African title, Ethiopia’s Almaz Ayana took off after 3000m to win by the huge margin of 25 seconds, stopping the clock at 15:33.32.

European champion Sifan Hassan broke up the African dominance of the distance events, winning the 1500m. Ethiopia’s world junior champion Dawit Seyaum darted to the front with 250 metres remaining, but Hassan had enough left in the tank to overtake her coming off the final bend, kicking on to win in 4:05.99.

Seyaum faded to third as Shannon Rowbury came through to take second place for the Americas in 4:07.21.

Having never finished in the top three before in the women’s 3000m steeplechase in this competition, the Americas took top points thanks to US record-holder Emma Coburn. World leader and African champion Hiwot Ayalew had a slight lead approaching the final barrier, but a slight stumble proved costly as Coburn capitalised, crossing the line in 9:50.67.

The same teams filled the top three spots in the men’s event, albeit in a slightly different order as African champion Jairus Birech sprinted away from Evan Jager of the Americas to win in 8:13.18. Jager, who led at the bell, settled for second place in 8:14.08, three seconds ahead of Asia-Pacific’s Abubaker Ali Kamal.

Another sprint 1-2 for the Americas

Having filled the top two spots in the women’s 100m and 400m yesterday, Americas did so once again in the men’s 200m.

Diamond Race winner Alonso Edward was neck-and-neck with Americas team-mate Rasheed Dwyer and both were almost inseparable as they crossed the line. Both were given the same time of 19.98, a PB for Dwyer, as Edward was given the win.

Europe gained a full 15 points in the women’s long jump, narrowly averting a disaster. European champion Eloyse Lesueur opened her campaign with three fouls, but on her final attempt she flew out to 6.66m to go into the lead.

Team-mate Ivana Spanovic was second with 6.56m. The American duo were third and fourth, placing ahead of the two Africans, with the Asia-Pacific representatives taking seventh and eighth.

World indoor champion Mariya Kuchina enjoyed a clean card up to and including 1.97m and then popped over 1.99m at the second time of asking to win from Chaunte Lowe of the Americas, who cleared 1.97m.

Former Olympic champion Gerd Kanter became Europe’s sixth successive winner of the discus. He took an early lead with 62.91m, increased it to 63.86m in the second round and then ended his season with his winning distance of 64.46m.

Hosts Africa end on a high

They were out of contention for the overall title, but Africa enjoyed a late rush by taking victories in the final field event, the final individual track event, and the final race of the weekend.

World leader Ihab Abdelrahman El Sayed, representing Africa, made history by becoming the first non-European winner of the men’s javelin at the World or Continental Cup.

He led from the outset, opening with 81.77m before unleashing his winning throw of 85.44m in the second round. World champion Vitezslav Vesely placed second with his third-round throw of 83.77m and Olympic champion Keshorn Walcott was third, just 25cm behind.

Duane Solomon of the Americas led at the bell in 51.55, but Amos came through strong with 200m remaining, kicking away to win in 1:44.88. Aman was almost half a second behind with European champion Adam Kszczot taking third.

For the fourth time in a row, the Americas women won the 4x400m. With individual 400m winner Francena McCorory on second leg and Diamond Race winner Novlene Williams-Mills on anchor, their winning time of 3:20.93 was a world-leading mark and African all-comers’ record.

Europe finished more than three seconds behind in 3:24.12, with Africa taking third.

There was more excitement in the men’s race though. Europe and the Americas, with 400m hurdler Javier Culson, were about level after the first exchange, but Isaac Makwala ran a storming second leg to give Africa the lead at half way.

Kim Collins then, somewhat surprisingly, ran third leg for the Americas as he chased Saviour Kombe of Africa hard, but the 38-year-old suffered on the home straight, dropping to third.

Wayde van Niekerk and Martyn Rooney received the baton almost level on the last leg, but Van Niekerk held off the European champion to win in 3:00.02, just 0.08 ahead of Europe.

World 400m champion LaShawn Merritt and Japan’s Julian Jrummi Walsh both ran sterling final legs, but were too far behind to make an impact as Americas and Asia-Pacific finished third and fourth respectively.

Europe had already done enough to win by this point, but their 13 points in the relay brought their overall tally to 447.5. Americas finished second with 390 points with Africa third (339) and Asia-Pacific fourth (257.5).