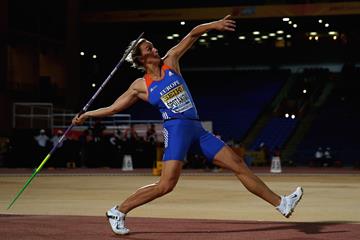 Although they were never expected to be in the hunt for overall victory at the IAAF Continental Cup, Marrakech 2014, being the host nation certainly didn’t harm Africa as they got off to a good start on the first day of action in Marrakech on Saturday (13).

Returning to the stadium in which he won the African title last month, Commonwealth champion Cornel Fredericks made good use of his strong finish in the 400m hurdles to overtake Javier Culson on the home straight, winning in 48.34. It was Africa’s first win in this event since 1998, the last time the competition was held in Africa.

Africa then secured two of the top three places in the men’s 5000m as Isiah Koech sprinted away to win in 13:26.86 with team-mate Nguse Amlosom in third, 13:31.31. Zane Robertson of Asia-Pacific finished in between the two in second place, clocking 13:29.27.

But despite their early exuberance, the might of Europe and the Americas eventually showed.

Two-time world champion David Storl saved his best throw for the last round in the shot, bagging maximum points for Europe with his 21.55m effort. O’Dayne Richards of the Americas team was a surprise second-place finisher, throwing 21.10m ahead of team-mate Joe Kovacs (20.87m).

The Americas picked up eight points in the women’s 400m hurdles with world leader Kaliese Spencer dipping below 54 seconds, winning in 53.81. European champion Eilidh Child was second in 54.42.

World champion Caterine Ibarguen also lived up to her favourite tag, winning the triple jump by improving with every round. She opened with 14.30m, then improved to 14.43m and 14.52m, passing the final round. It was the first time an athlete from the Americas has won the women’s triple jump at the World Cup or Continental Cup.

Americas then made up valuable points in the women’s discus as Gia Lewis-Smallwood pulled off a surprise victory with 64.55m. Former world champion Dani Samuels, representing Asia-Pacific, was second with 64.39m, while world and Olympic champion Sandra Perkovic was an uncharacteristic third with 62.08m, her lowest finishing position in a discus competition since July 2010.

Having suffered defeats in her past two races, world champion Eunice Sum got back to winning ways in the 800m in Marrakech. Asia-Pacific’s Tintu Luka led through 400m in a swift 57.91 and at this stage of the season, few of the athletes in the field had the legs to maintain that pace.

Sum did, though, and strode away down the home stretch to win in 1:58.21 to notch up Africa’s sixth win in the women’s 800m in the past seven editions of this competition.

Ajee Wilson of the Americas was second in 2:00.07 with European champion Marina Arzamasova coming through to take third in 2:00.31.

Americas bagged maximum points in the women’s 400m and 100m. World indoor champion Francena McCorory won the 400m from Novlene Williams-Mills, 49.94 to 50.08. In fourth, Kabange Mupopo – captain of the Zambian football team and competing in her first year of athletics – set a national record of 50.87.

In the shorter sprint, Veronica Campbell-Brown powered away from the field to win in 11.08 into a -1.5m/s headwind. Americas team-mate Michelle-Lee Ahye was second in 11.25, just holding off European champion Dafne Schippers by 0.01.

In the men’s 400m, LaShawn Merritt regained his title from eight years ago, clocking 44.60 to win for the Americas. He left his charge late though, overtaking African champion Isaac Makwala right at the end as the Botswanan clocked 44.84 from Yousef Masrahi of Asia-Pacific, 45.03.

The closest finish of the day came in the men’s 100m as just 0.01 separated the top three.

European champion James Dasaolu had a significant lead at half way, but it was then eaten into by Mike Rodgers of the Americas and Femi Ogunode of Asia-Pacific. The three athletes crossed the line in unison, but after a short wait Dasaolu was announced the winner with 10.03.

Rodgers was given second place with 10.04 and Ogunode third with the same time.

Dibaba back to winning ways

Despite being one of the sensations of the winter season and breaking the world indoor record at the distance, Genzebe Dibaba had been defeated in all of her races over 3000m this summer. But she remedied that in Marrrakech by giving Africa their fourth consecutive victory in the discipline at this competition.

More valuable points came Africa’s way in an exciting men’s 1500m race in which world indoor champion Ayanleh Souleiman defeated world champion Asbel Kiprop for the sixth time this year. After Europe’s Henrik Ingebrigtsen led for the first half, Souleiman then moved into the lead.

Kiprop kicked hard with half a lap remaining, but the Djiboutian athlete maintained his lead and won in 3:48.91 from Kiprop’s 3:49.10. European champion Mahiedine Mekhissi-Benabbad was third in 3:49.53.

He may have suffered another defeat to world indoor champion Mutaz Essa Barshim at the IAAF Diamond League final in Brussels last week, but world and European champion Bogdan Bondarenko was nothing if not motivated tonight in Marrakech.

Bondarenko entered the competition with a first-time clearance at 2.27m, a height at which Barshim needed two attempts. Both athletes then needed three tries at 2.34m as Olympic champion Ivan Ukhov, representing Europe, moved into the lead with a second-time clearance.

With the bar at 2.37m, Bondarenko flew over on his first attempt as Barshim failed three times. Ukhov then retired from the competition as Bondarenko ended his series with a trio of failures at 2.43m. Nevertheless, both he and Ukhov achieved their main goal of securing maximum points for Europe.

Ignisious Gaisah bagged another eight points for Europe in the long jump, winning with 8.11m (-0.7m/s). The Dutchamn was the only man to surpass eight metres as Will Claye of the Americas was second with 7.98m, two centimetres ahead of South Africa’s Zarck Visser.

After winning at the IAAF Diamond League final in Brussels, European champion Barbora Spotakova had mentioned how she prefers competing in front of an enthusiastic crowd. The Czech thrower may not have had such conditions tonight in Marrakech, but that didn’t stop her from breaking the African all-comers’ record with her third-round throw of 65.52m.

African champion Sunette Viljoen was second with 63.72m with Liz Gleadle of the Americas, the only woman to beat Spotakova this year, taking third with 61.38m.

Asia-Pacific’s only win of the day came – somewhat surprisingly – in the women’s pole vault. World leader and pre-event favourite Fabiana Murer failed to get over her opening height, leaving the way clear for Li Ling to take the win with 4.55m, the best women’s pole vault mark ever witnessed on African soil.

Another African all-comers’ record fell in the men’s 4x100m as a team comprising Kim Collins, Mike Rodgers, Nesta Carter and Richard Thompson won in 37.97, despite never having ran together as a team before today.

In second, Europe – represented by continental champions Great Britain – finished second in 38.62, half a second ahead of a Nigerian team representing Africa.

Americas won the women’s 4x100m relay too. The top two finishers from the 100m, Campbell-Brown and Ahye, teamed up with Tianna Bartoletta and Samantha Henry-Robinson to win in 42.44. European champions Great Britain were a comfortable second in 42.98. An all-star African team were disqualified, giving third place to Japan’s national squad, who were wearing the purple and yellow vests of Asia-Pacific.

At the end of the first day, Europe leads the competition as expected with 222.5 points. Americas are second with 191 with Africa in third (164) and Asia-Pacific fourth (137.5).