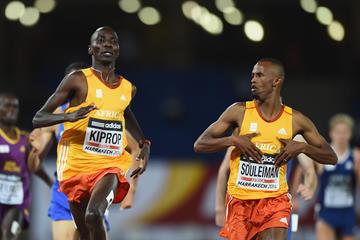 At the IAAF Diamond League meeting in Birmingham three weeks ago, Ayanleh Souleiman was denied a place on the distinguished roll of honour in the Emsley Carr Mile by the fast-finishing Asbel Kiprop.

When it came to the 1500m at the IAAF Continental Cup, it was a rather different story for the 21-year-old Djiboutian athlete.

Steve Ovett won the inaugural World Cup 1500m in Dusseldorf in 1977, ahead of Thomas Wessinghage and Jurgen Straub. He won again in Rome in 1981, beating John Walker and Olaf Beyer.

Kiprop, the Kenyan who won the world title in 2011 and 2013, was out to follow in the great Briton’s footsteps – and also on a revenge mission, having finished runner-up to Souleiman in the African Championships here last month.

European silver medallist Henrik Ingebrigtsen of Norway led through 400m in a dawdling 65.95 and 800m in 2:15.18. Kiprop had been content to linger second to the back until just before the bell, when Souleiman slipped into the lead and his Africa team-mate followed close behind.

With 200m to go, Kiprop tried to get past but Souleiman resisted. It was the same as the pair came into the home straight. Again Kiprop attacked and this time Souleiman not only held his ground but pulled ahead to win in 3:48.91.

“I am used to fighting with Kiprop in Diamond League meetings but today it was a completely different situation,” said Souleiman, who won the world indoor 1500m title in Sopot in March. “Despite the fact that we were in the same team, we were running our individual races.

“It is my second victory in Marrakech, after the African Championships. I think it is my lucky stadium.”