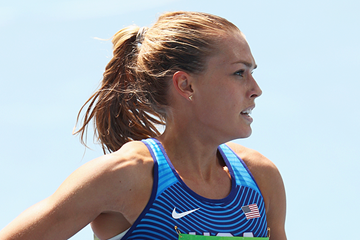 Quigley, who lowered her steeplechase lifetime best to 9:20.00 during the course of the outdoor season, covered the 6km course in 19:31 to claim individual honours ahead of Sarah Pagano (19:36) with Quigley’s Bowerman Track Club teammate Samantha Silva third in the same time.

But even though Bowerman Track Club dominated the podium, the team title went to Boston Athletic Association. Led by Pagano, the two-time defending champions packed well with four finishers inside the top 10 while High West Performance – led by Tara Welling in fifth – finished just ahead of Bowerman Track Club for the runner-up spot in the team race.

The American Distance Project dominated the men’s individual and team contests with multiple NCAA champion Sam Chelanga and Stanley Kebenei taking first and second in 28:55 and 29:04 respectively with clubmate Hillary Bor, an Olympic steeplechase finalist in Rio, fourth individually in 29:13.

Sixth and seventh overall, Martin Hehir (29:18) and Scott Fauble (29:24) led Hoka One One to team silver with ninth-place finisher Trevor Dunbar leading Hudson Elite to third in the team standings.

Jackline Adodonyang came out triumphant in the senior women’s race at the fifth leg of the Athletics Kenya Cross Country series in Kapsokwony on Saturday.

Adodonyang dominated the contest staged at the Kapsokwony High School, winning the 10km in 36:10 to defeat Nelly Jeptoo by 45 seconds while two-time Chicago Marathon winner Florence Kiplagat rounded off the podium in 37:29.

“I have never been to Mount Elgon. It is just by chance that I decided to participate in the race. Finishing third makes me happy,” said Kiplagat, who eased back into racing in Iten last weekend having taken a small break after retaining her Chicago Marathon title in October.

Unheralded Noah Kipkemboi – who only finished seventh in Eldoret a fortnight ago – ran out a surprise winner in the men’s senior 10km in 31:01 ahead of sub-60-minute half-marathon runner Abraham Kiptum (31:09) with Cosmas Birech, the older brother of steeplechaser Jairus, third in 31:10

World U20 steeplechase champion Celliphine Chespol has outlined she will be one of the favourites to make the Kenyan team for the IAAF World Cross Country Championships Kampala 2017 after winning the junior women’s 6km in 21:03 while little known Daniel Kipchumba won the junior men’s 8km in 24:46.