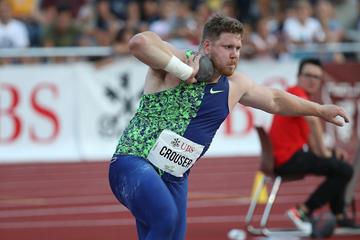 Gunthor, who was a special guest at this year’s meeting, held the previous meeting record of 21.48m since 1993. Crouser, who is the world leader this year with 22.74m, has thrown beyond the 22-mere barrier in nine meetings this season.

Chukwuebuka Enekuechi produced his ninth put over 21 metres to take second place with 21.44m just a few days after his win at the African Games in Rabat with 21.48m. European indoor and outdoor champion Michal Haratyk finished third with 20.69m.

Katie Nageotte continued her good period of form by winning a star-studded women’s pole vault with a first attempt clearance at 4.77m before bowing out with three tries at 4.83m. Nageotte scored her second win on Swiss soil this season after winning in Lausanne with 4.82m. Olympic and world silver medallist Sandi Morris had to settle with second place with 4.70m before three misses at 4.77m. Emily Grove from the USA cleared 4.63m to take third ahead of 2015 world champion Yarisley Silva (4.56m).

“I clocked a good time, but I was a bit tired,” Kambundji said. “Bellinzona is a special place for me. The track is very fast.”

European 400m hurdles champion Lea Sprunger, the poster girl of this year’s meeting, clinched another popular win taking her specialty in 55.24 to the delight of the 5000 spectators who packed the stands of the Comunale Stadium in Bellinzona.

Olympic fourth placer Cindy Ofili from Great Britain took the win in the women’s 100m hurdles setting the qualifying standard for the World Championships with 12.85. The British hurdler edged out this year’s Pan American Games champion Andrea Carolina Vargas and Queen Claye of the US, who finished second and third sharing the same time of 12.86.

Jamaica’s Andrew Riley clinched a narrow win in the men’s 110m hurdles in 13.60 into a headwind of -0.2 m/s, holding off Italian champion Hassane Fofana by 0.02.

Lashawn Merritt, the 2008 Olympic 400m champion, won his specialty in 45.82 in his first race over the distance since the World Championships in 2017.