Kenya’s double world champion Asbel Kiprop produced one of the finest runs of his career here at tonight’s opening 2014 IAAF Diamond League meeting in Doha as he won a pulverising 1500m race which saw a record six men finish inside 3:31.00, clocking a world-leading 3:29.18 which was also a meeting record.

And when Kiprop’s compatriot Hellen Obiri set an African and Diamond League record of 8:20.68 in the final event of the evening, a 3000m which saw Ethiopia’s world indoor champion Genzebe Dibaba run a personal best which was only good enough for sixth place, the joy of the large Kenyan contingent in the Qatar Sports Club stadium was complete.

It was something of a dampener for the flag-waving Ethiopian contingent who had also animated a top quality opener to the latest IAAF Diamond League series, but those fans had the memory of an equally eye-catching victory over 800m by their world indoor and outdoor champion Mohammed Aman.

At the bell in the 1500m, Kiprop was covering the leader, fellow Kenyan James Magut, and in the back straight he moved to the front along with Djibouti’s world indoor 1500m champion and world 800m bronze medallist, Ayanleh Souleiman.

For about 100 metres, the tall, black-shirted Kenyan and his smaller, more obviously powerful opponent ran together before Kiprop glided clear in the final 40 metres.

Kiprop’s compatriot Silas Kiplagat, who had set the meeting record of 3:29.63 the previous year, moved through to take second place in 3:29.70, with Souleiman being rewarded in third place with a national record of 3:30.16.

Algeria’s Olympic champion Taoufik Makhloufi, in what was only his sixth race since winning the Olympic title in London, was fourth in a personal best of 3:30.40, ahead of Magut, who also clocked a personal best with 3:30.61. Aman Wote’s sixth place earned him an Ethiopian record of 3:30.86. Stupendous stuff.

The climax of the 3000m was equally gripping as Dibaba, who broke three world indoor records earlier this year before taking the world indoor title two months ago, looked uncomfortable as she led through the bell with six runners queuing behind her.

Dibaba maintained her challenge until the final bend, when she began to fade under the challenge of Kenya’s Mercy Cherono, who pulled clear as she entered the home straight. But just as it seemed Cherono had earned a famous victory, her compatriot Obiri appeared at her right shoulder and passed her in the final 15 metres.

Obiri’s time was fastest ever recorded by a non-Chinese runner. Cherono was rewarded with a time of 8:21.14 – one of 14 personal bests recorded in the race. Kenyans filled the next two places, thanks to Faith Kipyegon (8:23.55) and Viola Kibiwot, who ran a personal best of 8:24.41.

Almaz Ayana finished as first Ethiopian home in fifth place – her time of 8:24.58 being a personal best, as was Dibaba’s effort of 8:26.21, well inside her previous best outdoor mark from last year of 8:37.00. It was some way to start the season.

“I don’t know what went wrong,” said Dibaba. Not a quote you often associate with an athlete who has set a personal best.

With David Rudisha, Kenya’s 800m world record-holder, absent with injury, two super-talented 20-year-old challengers, Mohammed Aman and Nijel Amos, produced a classic finish before Aman, who has taken world indoor and outdoor titles in Rudisha’s absence, prevailed in 1:44.49 in a race where no Diamond Race points were at stake.

Early leader Jeremiah Mutai of Kenya led into the final straight, but as Aman set himself up to challenge, Amos – who took silver behind Rudisha at the London 2012 Olympics in a time of 1:41.73, equalling the third best ever – moved into the lead round the outside.

The two young athletes, teeth bared with effort, raced together over the final 40m, with the Botswana athlete narrowly ahead. But in the final five metres his rival found the energy to nudge ahead, to the delight of the huge contingent of flag-waving Ethiopian fans in the full 15,000-seater Qatar Sports Club stadium.

Amos had to settle for a season’s best of 1:44.54 in second place. Never mind. As a part-time DJ back home, he has his first album coming out next week. 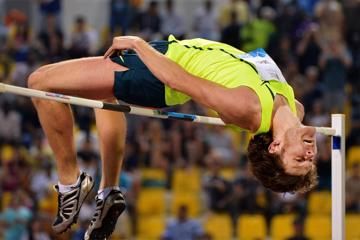 Ukhov back on top again in Doha – IAAF Diamon... 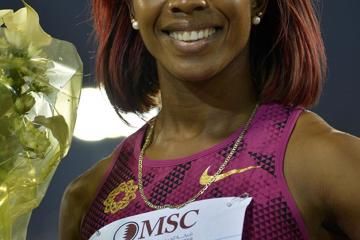