Mauritius commendably took over the organisation of the 11th African Junior Championships from South Africa two months prior to the competition. In return, the athletes staged the show and came up with two championship records at the Germain Comarmond Stadium in Bambous.

The landmarks of the championships have been the stunning performances of the Nigerian sprinters and the Ethiopian distance runners. But perhaps the most surprising gold medal is the one won by Kenya’s Alex Kiprotich in the men’s Javelin.

During the four days of competition, Nigerian sprinters proved that they are undoubtedly back in business after their dominance on the African stage had slipped in recent years.

Nigeria was not the only nation who impressed in the sprints at the championships. Ethiopia’s Yuma Tegest Tamangnu won silver medals in the women’s 100m and 200m, while her team-mates won bronze medals in the 400m and 400m Hurdles before they strongly challenged Nigeria in the 4x400m to finally claim the silver medal.

Ethiopian women also maintained their domination of the middle and long-distance races by clinching gold medals in the 800m, 1500m, 3000m, 5000m and 3000m Steeplechase. The 1500m was one of the best events of the championships as Dawit Seyaum avenged her World Youth Championships defeat to team-mate Tigist Gashaw.

Weynshet Ansa was another World youth medallist in action in Bambous. Winner of the Steeplechase bronze medal in Donetsk, this time Ansa stood on the top of the podium after taking gold in the 3000m Steeplechase, dipping under 10 minutes for the first time in her life with 9:59.46.

However, their male counterparts were not so competitive, as Kahsay Adhana was the only Ethiopian winner in a men’s event, taking gold in the 800m. In a tactical race, he sat back all the way before unleashing a devastating acceleration in the final straight to take the victory.

Ahmed Hassan won the men’s Shot Put with a championship record of 19.59m. It was one of four gold medals won by Egypt in technical events as Eslam Ibrahim and Ebrahim Mohamed won the men’s and women’s Hammer respectively with 74.49m and 53.88m, Kaseb Omar triumphed in the men’s High Jump with 2.11m, and Fadya El Kasaby took the first title of the championships, taking gold in the Discus with 42.71m.

However, Moses Mukono put Kenya back in the limelight when he kicked with half a lap remaining of the 5000m to take gold.

But one of Kenya’s four gold medals was not won in a track event. Alex Kiprotich was the surprise winner of the men’s Javelin, taking gold with his fourth-round throw of 71.43m.

“The gold medal of Kiprotich reminds me of the fourth-place finish of Julius Yego in the Javelin throw at the last IAAF World Championships,” said Hamad Kalkaba Malboum, president of the Confederation of African Athletics (CAA). “This is very encouraging as it shows that Kenya is no longer relying only on its distance runners but that there is serious work which is being done with young athletes to enable them to get involved in highly technical events.”

Menon Ramsamy and Reynolds Quirin for the IAAF

BACK
Pages related to this articleAthletes
Sabelo Ndlovu 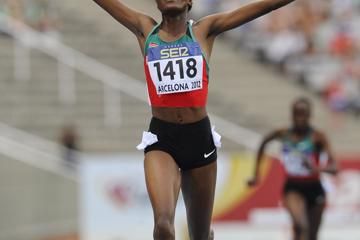 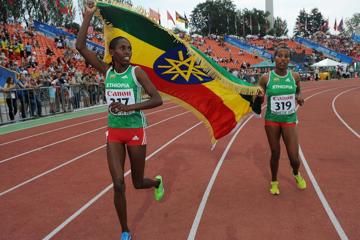