Hawkins led from the gun, pushing out from the pack in typical fashion. Last year’s winner, Garrett Heath of the USA, was on the shoulder of the British Olympian for much of the race before fading, with Heath’s compatriot Korir then taking on the challenge of breaking Hawkins’ lead.

After navigating some of the tricky and tight bends the course offered on the final long lap, Hawkins looked to have broken clear of Korir, only for the US runner to sprint past him about 20 metres before the tape. Korir crossed the line in 24:03, one second ahead of Hawkins.

“I kept telling myself that I was going to be number two,” said Korir. “I can’t believe I won.”

“It wasn’t what I wanted but it is where I am,” said Farah. “The last bit of training hasn’t gone as well as I would have wanted, but this is a team event and I wanted to come out here and represent my country and help the guys.”

In the mixed 4x1km relay, which did not count towards the final team match standings, anchor leg runner Laura Muir brought the British team home superbly to win the Stewart Cup. After taking the baton in second place just behind Scotland’s A team, Muir went on to win by seven seconds.

In the junior men's 6km event earlier in the afternoon, USA got their day off to a fine start as Noah Affolder took the victory in 19:29. Britain’s Harriett Knowles-Jones took the first home victory of the afternoon, winning the junior women’s 4km event in 13:56.

USA won the team competition with Europe in second and Britain third.

Olympic 10,000m ninth-place finisher Nguse Amlosom from Eritrea eked out a narrow victory over Kenya’s Jairus Birech in the senior men’s 10.7km at the Cross Internacional Zornotza in Amorebieta on Sunday (8).

On a mild day with firm underfoot conditions, Amlosom ran out to his second notable victory on Spanish soil in the space of just over a week. After winning the San Silvestre Vallecana 10km road race in Madrid on New Year’s Eve, Amlosom clocked 32:53 to defeat Birech by three seconds to ensure back-to-back wins.

European 5000m champion Ilias Fifa claimed the domestic bragging rights with a third-place finish in 33:01 ahead of Ayad Lamdassem (33:05) and Antonio Abadia (33:11) while veteran Jesus Espana, who beat Farah for the European 5000m title back in 2006, finished seventh in 33:30.

The eighth and final leg of the Athletics Kenya Cross Country series in Embu on Saturday (7) was devoid of too many internationally renowned athletes which allowed the largely unheralded Morris Munene and Sheila Chesang to claim the plaudits in the senior races.

Organisers, British Athletics and Steven Mills for the IAAF

BACK
Pages related to this articleAthletes
Leonard Korir 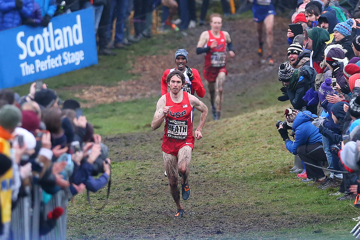 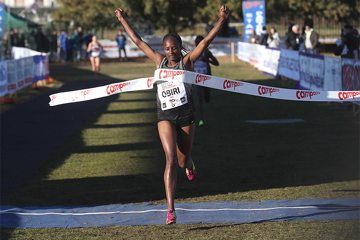