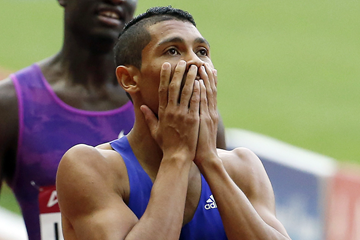 Sprints and hurdles were in the spotlight at the Spitzen Leichtathletik meeting in Lucerne on Tuesday (14).

South Africa’s Wayde Van Niekerk followed up his sensational 43.96 400m win over Kirani James at the IAAF Diamond League meeting in Paris with the first sub-20-second 200m race of his career.

Competing on the eve of his 22nd birthday, he crossed the finish-line in a lifetime best of 19.94 in the ‘B’ race, finishing in front of last year’s Diamond Race winner Alonso Edward, who set a season’s best of 20.03.

Not only was Van Niekerk’s time a South African record, but he also joined a select group of three other sprinters to have run faster than 20 seconds for 200m and 44 seconds for 400m, the others being Michael Johnson, LaShawn Merritt and Isaac Makwala.

It was the 88th time that Powell had broken the 10-second barrier and his sixth such performance in 2015.

Two-time world indoor champion Lolo Jones finished third in 12.84 ahead of Swiss rising star Noemi Zbaren who followed her European under-23 victory last week in Tallinn with a solid fourth-place finish in 12.90.

Charonda Williams, the 2012 200m Diamond Race winner, edged Jamaica’s Natasha Morrison by 0.03 in the 100m, winning with a season’s best of 11.14. She then completed the sprint double by winning the 200m in a lifetime best of 22.32, beating double Olympic champion Veronica Campbell-Brown (22.61).

Commonwealth champion Stephenie Ann McPherson won the women’s 400m in 50.50, holding off Bahrain’s Kemi Adekoya who broke her own national record with 50.86. It was her third national record of the season, having clocked 54.31 and 54.12 in the 400m hurdles.

Throws victories for Molitor and Adams

Germany’s Katharina Molitor took the lead in the javelin on her first attempt with a lifetime best and stadium record of 65.40m and improved to 66.40m with her final throw. She beat three talented compatriots in the form of 2010 European champion Linda Stahl (64.65m), world champion Christina Obergfoll (59.51m) and European under-23 champion Christin Hussong (56.37m).

Four-time world champion Valerie Adams returned to winning ways in front of her Swiss fans in the women’s shot put with 18.73m, beating Cleopatra Borel from Trinidad and Tobago by just two centimetres.

Borel led for much of the competition, opening with 18.14m before improving to 18.39m and 18.65m. Adams, who lost her first competition since August 2010 when she finished fifth at the IAAF Diamond League meeting in Paris, also got better with each round and threw 18.73m in round five to take the lead. Borel responded with 18.71m on her final attempt, but had to settle for second place.

Home fans had plenty to celebrate when fresh Swiss record-holder Selina Buchel held off world indoor champion Chanelle Price by 0.03 to win the 800m in 1:59.21, notching up her 11th win out of 12 races this year. It was the European indoor champion’s second-fastest time to date, following the 1:57.95 national record she set in Paris.

Sandi Morris cleared 4.71m on her second attempt to win the women’s pole vault ahead of local favourite Nicole Buchler who vaulted 4.60m.

Germany’s Martin Wierig with 63.85m ahead of Christoph Harting – younger brother of three-time world champion Robert Harting – who returned from a recent bout of illness to place second with 63.18m.

Jeffery Gibson from The Bahamas clinched the win in the men’s 400m hurdles in 48.77, breaking his own national record. Denisa Rosolova from the Czech Republic won the women’s event in 55.52.