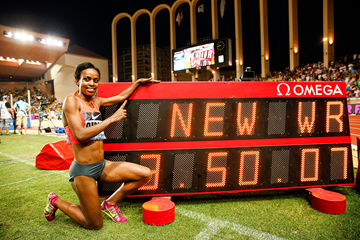 The Herculis meeting ended, as is tradition, with a pyrotechnic show on the infield. But the real fireworks at the IAAF Diamond League meeting in Monaco on Friday (17) came on the track about 50 minutes earlier.

Genzebe Dibaba achieved what many had believed to be unachievable, breaking the 1500m world record* with a time of 3:50.07.

Dibaba still had European champion Sifan Hassan for company as she passed the bell in 2:50.3, but the two-time world indoor champion kicked hard. With 100m left to run, it became clear that Dibaba was, at the very least, going to get close to the world record. But she charged for the line, crossing it in 3:50.07 to become the fastest 1500m runner in history.

In a race of great depth, six women ran faster than four minutes. Hassan clocked a national record of 3:56.05 in second, while Rowbury broke the North American record with 3:56.29 in third. 2011 world champion Jenny Simpson recorded her second-fastest time ever with 3:57.30 in fourth.

Britain’s Laura Muir and Maureen Koster of the Netherlands were fifth and sixth, smashing their PBs with 3:58.66 and 3:59.79 respectively.

“The pacemaker did a great job,” said Dibaba. “I’m the first athlete from Ethiopia to break the world record in the 1500m; that is amazing.

“I think Tirunesh will be happy, all of Ethiopia will be happy,” added Dibaba of her older sister, who recently gave birth to her first child. “I knew from the beginning that I could break the record and I feel like I can still improve. I’ll try to break the 5000m world record after the World Championships in Beijing.”

Earlier in the evening, Asbel Kiprop had come within one second of the world record in the men’s 1500m. It didn’t count towards the Diamond Race, but it had a big impact on the world all-time list.

Returning to the Stade Louis II, the stadium that has played host to his three fastest times, two-time world champion Asbel Kiprop made his intentions clear from the outset.

He clung to the pacemakers, who passed through 800m in 1:50.37. Double world and Olympic champion Mo Farah was leading the chasing pack, but at the bell he was more than 10 metres behind his Kenyan rival.

Kiprop held his form on the final lap and continued to pull away from the rest of the field, clocking 3:26.69 to become the third-fastest 1500m runner in history behind Hicham El Guerrouj and Bernard Lagat, breaking El Guerrouj’s meeting record in the process.

Morocco’s 2012 world indoor champion Abdalaati Iguider also passed Farah on the last lap to clock 3:28.79, while Farah finished fourth in 3:28.93. Nick Willis broke his own Oceanian record with 3:29.66 in fifth and the relatively unheralded Kenyan champion Elijah Manangoi took five seconds off his best to clock 3:29.67 in sixth.