A host of Russia’s top male high jumpers clashed at the 17th Moscow Cup, a High Jump meeting to music, at the Znamensky Brothers Olympic Centre on Thursday (31) with Sergey Mudrov pulling off a surprise victory.

Just two days after finishing a disappointing 10th in Trinec, Olympic champion Ivan Ukhov was uneasy from the outset tonight in Moscow after being drawn as the ‘unlucky’ 13th jumper. After opening at 2.15m, he went on to clear 2.24m. He then took one attempt at 2.27m before saving his remaining two attempts for the next height, 2.30m, but he failed to clear it.

In a competition where three younger athletes filled the podium, Ukhov’s best jump of 2.24m was only good enough for fourth place, although he did finish ahead of 2010 European champion Aleksandr Shustov.

Mudrov cleared 2.27m on his first attempt, which was good enough to secure the victory on countback ahead of 19-year-old Ilya Ivanyuk and Dmitrik Semyonov, both of whom set outright personal bests.

For Mudrov it was his second victory in a row for the 2013 indoor season. Last week he won in Dresden, leaping a season's best of 2.29m - just one centimetre below his indoor PB.

World and Olympic champion Anna Chicherova was in attendance, albeit just as a spectator. She is skipping the 2013 indoor season, choosing instead to focus on the IAAF World Championships in Moscow.

Nickolai Dolgopolov for the IAAF 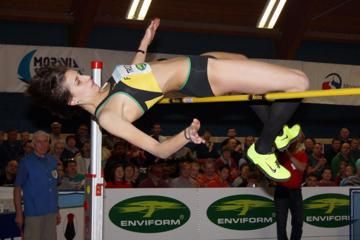