The 23-year-old from Great Britain shattered her own national record with a run that propelled her to 13th on the world all-time list with her world-leading performance.

After being led through the first 800m in 2:09, Muir took to the front when second pacer Judy Kiyeng dropped out at 1000 metres. At that stage she led world indoor champion Sifan Hassan by five metres, with Olympic champion Faith Kipyegon following just behind.

It takes much to hold off that pair, and Muir, who was seventh in the final in Rio, showed she had the goods with a determined 59.99 last lap. It was the second time this season Muir broke the British record, having beaten Kelly Holmes’ mark for the first time at the IAAF Diamond League fixture in London in July.

“I couldn't believe the time, especially since I didn't do one track session since Rio,” said an elated Muir.

“I just went with the pacemaker and I knew I had to dig in and hold on during the third lap. I'll be in Zurich next week to finish my season.”

The pace and the heat took their toll on Hassan; Kipyegon passed her in the home straight to take second in 3:56.72. Hassan held on for a season’s best of 3:57.13. Four other women, including Olympic bronze medallist Jenny Simpson of the US, came home within four minutes in what transpired as the fastest 1500m contest of 2016.

In the women’s 400m, Natasha Hastings’ strong finish got her the win in 50.06. Stephenie Ann McPherson had led for much of the race, yet her legs began to tie up in the closing thirty yards. Hastings’ form never wavered, and she pulled through for her first IAAF Diamond League win of the season.

“It wasn’t easy coming here after Rio so I’m pretty pleased with the time,” said a buoyant Hastings, who moved to third in the Diamond Race rankings.

McPherson finished second in 50.33 ahead of her Jamaican teammate Christine Day, third in 50.75. McPherson now tops the overall rankings, just a point ahead of Olympic champion Shaunae Miller, who did not run tonight.

French favourite Renaud Lavillenie reveled in front of his home crowd, winning the men’s pole vault despite a few scares. After first-time clearances at 5.61m and 5.71m, the Olympic silver medallist needed three efforts to clear 5.81m – a height that Sam Kendricks of the US had popped over on his first try.

That left just those two men standing with the bar at 5.87m. The atmosphere on the far side of the stadium was bubbling, and while it propelled Lavillenie to a second-time clearance, Kendricks could not join him. The Frenchman then went over 5.93m, though he once again found a 6.00m clearance elusive this season.

“The audience was amazing, they helped me to give everything,” he said. “The competition was really hard tonight. But I managed to dig in and I found the power to achieve a strong performance. I'm so happy with this victory.”

It was his fourth IAAF Diamond League win of 2016, and secured the 29-year-old’s seventh straight Diamond Race trophy.

Spain’s Ruth Beitia matched the height that won her Olympic gold in Rio last week to win the women’s high jump. She enjoyed first-time clearances all the way to 1.98m, which would prove her best mark as she was unable to manage 2.02m.

“This is a dream after the European Championships and the Olympics,” the 37-year-old said, her win giving her a commanding lead in the Diamond Race with just one competition remaining. “I have one more Diamond League event in Zurich and then it will be holidays and rest. But we'll see Ruth again next year.”

St Lucia’s Levern Spencer cleared a season’s best of 1.96m to take second, a performance that leaves her second overall in the Diamond Race ahead of Italy’s Alessia Trost, who was third with a best of 1.93m.

Czech javelin thrower Jakub Vadlejch launched a lifetime best of 88.02m in the javelin to record his second IAAF Diamond League win of the season. The result also means he stays close to Thomas Rohler in the overall season standings, the Olympic champion only able to produce an 84.16m effort for third.

Rohler’s German teammate Julian Weber was second with 87.39m, also in the third round, though he will not figure in the race for the diamond at the season-ender in Zurich.

Yet for Vadlejch the hunt is well and truly on. His win leaves him just four points behind Rohler, a gap that can be closed with double points available in Thursday night’s decider.

In the men’s triple jump, Alexis Copello led after a third-round 16.90m, though each of his efforts had been way back on the board. Those crucial centimetres would ultimately cost the Cuban, who watched as USA's Chris Carter went out to 16.92m to wrestle the lead at half way.

Though Copello posted another three legal jumps to complete a consistent series – all his marks falling within a 19-centimetre range – he was unable to better Carter’s effort. His first IAAF Diamond League win of the season moves him into third behind Copello. Olympic champion Christian Taylor is the overall leader but was not present tonight.

BACK
Pages related to this articleAthletes
Jakub VADLEJCH 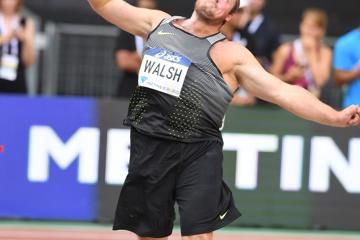