Tomas Walsh produced an Oceanian and meeting record to beat Olympic champion Ryan Crouser in the shot put at the Meeting de Paris, the 12th stop of the 2016 IAAF Diamond League series, on Saturday (27).

In punishing heat, the big throwing pair showed little sign of fatigue in their first competition since the Rio 2016 Olympic Games, where Crouser blew away the field to take gold on his Olympic debut.

It was entertaining from the start. New Zealander Walsh, the world indoor champion, went out to an area and meeting record of 21.81m with his second throw to take the lead over Crouser, who had led after a first-round 21.28m. Crouser then bettered the meeting record with 21.99m in round three. That mark held until the final round, and looked to be good for the win as arms tired and marks dropped.

Yet Walsh wasn’t done. With his last effort he produced another meeting record of 22.00m, eclipsing his US rival by a single centimetre. Crouser couldn’t respond and the win was Walsh’s.

“I didn’t really expect to throw so far,” said the Olympic bronze medallist. “After Rio, I had something to prove. The stadium, the fans, everything was perfect tonight. A great meeting.”

The victory gave Walsh a marginal lead in the Diamond Race standings over world champion Joe Kovacs, who was short of his best today. It will be all to play for at the double-points Zurich finale on Thursday.

Harrison has the Diamond

Harrison’s time of 12.44 is her seventh sub-12.50 clocking of the season – her second of the week following her Lausanne win – and her fifth straight IAAF Diamond League win. Harrison opened up a lead by the third barrier, and it only grew, her lightening track speed compensating for a few clipped barriers. Her Diamond Race trophy is now assured, provided she competes in the final in Zurich. At this point, nothing will keep her from the start line.

“I felt alright even though I kicked a few hurdles, which made me a bit upset,” Harrison said. “The start wasn’t that great as well. I have a few days off, so I’m really looking forward to Zurich.”

Dawn Harper Nelson, the 2008 Olympic champion, won the race for second in a season’s best of 12.65, just 0.01 ahead of third-placed Cindy Ofili.

The men’s 400m hurdles was a more closely contested affair. World champion Nicholas Bett fell in his heat in Rio, but the Kenyan beat the Olympic champion Kerron Clement with a strong finish in the night’s opening track event.

The two were level coming off the bend, but Clement lost his rhythm approaching the final hurdle – and Bett was able to pounce.

The win and season’s best (48.01) will be scant consolation for the Kenyan after his Olympic chagrin, though it does move him fifth in the Diamond Race with one race remaining. Clement finished second (48.19) and now tops the rankings, yet with only six points between him and fourth place Yasmani Copello (third tonight in 48.24), the Zurich finale should be a cracker.

Few dominate their event like Sandra Perkovic does the women’s discus. The double Olympic champion nabbed her fifth IAAF Diamond League win of the season to continue her unbeaten 2016 (in finals).

Matters were in the balance at the half-way stage. France’s Olympic silver medallist Melina Robert-Michon led with a third-round 64.24m, with Perkovic 21 centimetres back in second. Yet the Croatian found her rhythm by the time she entered the circle for the fourth time. She launched the discus out to 66.80m to take the lead, and extended it to 67.62m in the last round to win comfortably by more than three metres.

“It was amazing tonight, I'm so happy to win my first competition after Rio and my gold medal,” the 26-year-old said. “I was a bit tired after the Games but I still had some power left today.”

Robert-Michon’s mark was enough for second, and she was delighted to “share the good moment with the French audience”. World champion Denia Caballero of Cuba was third with 61.98m, her sole legal throw of her series.

Ivana Spanovic continued her incredible consistency, winning the long jump with a 6.90m jump. That came in the second round, and was her sole legal jump; the Olympic bronze medallist fouled her first effort and then passed her remaining jumps.

“I’m glad to have won as I was tired coming here after the Games,” she said. “I'll finish my season next week in Zurich.” There she will collect the Diamond Race trophy with her four wins leaving her unbeatable in the points chase.

World indoor bronze medallist Lorraine Ugen of Great Britain produced her best form of the season, going out to 6.80m for second. Estonian Ksenija Balta’s opening round 6.75m was enough to clinch third.

BACK
Pages related to this articleAthletes
Sandra PERKOVIĆ 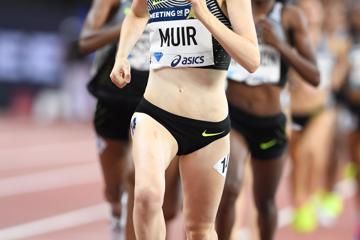