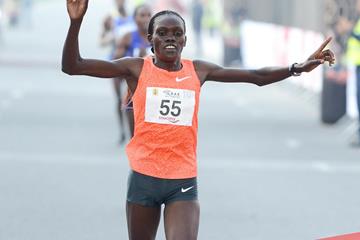 Cynthia Limo moved up to third on the world all-time list for the half marathon when she won the RAK Half Marathon in 1:06:04 in the emirate of Ras Al Khaimah on Friday (12).

With seven runners in contention through 10km and then 15km, the increase in pace over the next five kilometres had the effect of winnowing out the pack at the front.

By 20km, there was just Limo and 2014 world half marathon champion Gladys Cherono in contention but the winner broke away from her compatriot and rival over the last 800 metres, with Cherono finishing second just three seconds in arrears in 1:06:07.

Both women ran personal bests, Limo taking 37 seconds off her time and Cherono herself took 31 seconds off her best to move up to fourth on the all-time list with the fastest ever non-winning performance.

Ethiopia’s Genet Yalew was third in a national record of 1:06:26, losing contact with the two Kenyans around 19 kilometres, while Kenya’s Peres Jepchirchir came home fourth in 1:06:39.

In a race of stunning depth, Kenya’s Gladys Chesire and Jemima Jelagat finished in the next two positions, clocking 1:06:57 and 1:06:58 respectively.

Never before have six women gone under 67 minutes in the same race, the previous best being four in the 2013 edition of the same race. Into the bargain, the fastest ever times for the places from second to sixth were established.

The men’s race was a little less spectacular in terms of time but certainly not as far as excitement was concerned.

Ethiopia's Birhanu Legese won in 1:00:40, just holding off Kenya’s Stanley Biwott with a decisive change of gears over the final 100 metres, with the latter given the same time.

In a thrilling finale over the final few hundred metres, with seven men still together entering the final kilometre, just one second on the clock covered the first four men home, as Eritrea’s Nguse Amlosom finished third in 1:00:41 and Kenya’s Abraham Cheroben was fourth in the same time.