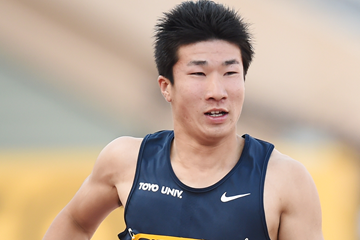 When it comes to wind-assistance, it is definitely possible to have too much of a good thing.

Athletes competing at the Texas Relays found that out the hard way as dozens of performances were deemed invalid for official purposes with the wind exceeding the allowable 2.0m/s.

Nevertheless, it didn’t detract from the exciting contests across the many events.

The 19-year-old’s time is the fastest ever electronic performance by an Asian sprinter under any conditions. Bromell, meanwhile, had recorded a wind-legal and world-leading 10.02 (-0.1m/s) in the heats one day prior.

Trinidad and Tobago’s Michelle-Lee Ahye was similarly impressive – and assisted by wind – in the women’s event. The 22-year-old won comfortably in 10.87 (3.3m/s).

The fast times continued later in the day as South Africa’s world and Olympic finalist Anaso Jobodwana produced his fastest ever 200m clocking under any conditions. The double World University Games champion stopped the clock at 19.87, helped by a 4.5m/s tailwind.

Having broken his own national indoor record four times earlier this year, Canadian pole vaulter Shawn Barber continued where he left off in his first outdoor competition of 2015.

He shared the lead with regular rival Sam Kendricks up to 5.60m, but Kendricks got over 5.70m on his first try. Barber passed to 5.80m, which Kendricks also cleared on his first attempt while Barber needed two tries, as did Jake Blankenship.

Barber again passed the next height, 5.85m, while Kendricks and Blankenship exited the competition with three failures each. Barber then got over 5.90m on his second attempt before rounding out his series with three unsuccessful attempts at 6.00m.

Down in sixth, Britain’s Adam Hague equalled the world age-17 best of 5.60m, breaking his own national junior record in the process.

USA’s 2009 world youth shot put champion Ryan Crouser was another easy winner. His winning heave of 21.11m was more than a metre farther than any other competitor managed.

The other stand-out performer on the infield was Jacorian Duffield, who added four centimetres to his outdoor PB to win the high jump with 2.31m.

Two-time NCAA Championships silver medallist Michael Stigler enjoyed a breakthrough in the 400m hurdles. He won by more than a second with 48.44, smashing his PB by three quarters of a second.