Lokomwa and Wambui continue Kenyan domination at Stramilano Half Marathon

Thomas Lokomwa and Lucy Wambui made it a Kenyan double victory at the Stramilano Half Marathon for the second successive year, winning at the Italian race in 1:01:39 and 1:10:52 respectively on Sunday (23).).

Lokomwa’s compatriot and 2013 winner Kiprop Limo was second across the line in the Arena Civica Stadium in 1:01:55 while Italy-based Ugandan Wilson Busienei was third in 1:02:08.

They went through at halfway in 28:59 before Melly dropped out at 15km, leaving the leading trio to battle for the top three places as they passed 15km in 43:54.

Lokomwa and Businei dropped Limo in the 17th kilometre then, just after 18km, Lokomwa pulled away while Limo got his second wind and overtook Businei and the trio stayed in those positions all the way to the line.

The 26-year-old Lokomwa belongs to the Turkana tribe in a semi-desert region in the north western part of Kenya.

“It was a good race but it was not easy as it was affected by wind. It was important to win the race against good athletes,” said Lokomwa.

In the women’s race, four women were together until 14km when Ethiopia’s Tilahun Biruk and Murigi pulled away from their compatriots, Ethiopia’s Sichala Deressa and Kenya’s Hellen Jepkurgat.

Murigi then steadily left Biruk behind in the final three kilometres, carving out a decisive gap of 18 seconds, with Biruk coming home in 1:11:10.

“I am happy because I set my personal best. The wind affected my race. I am happy to score a double as the men’s winner Lokomwa is my training partner,” said Murigi 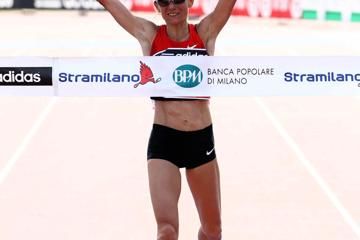 Jarso and Straneo beat the heat at the Strami... 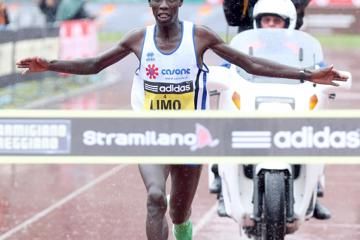 Limo and Kahenya win on rainy day in Milan...