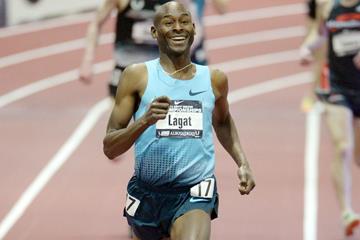 The latest instalment of the rivalry between Bernard Lagat and Galen Rupp followed a similar pattern on Saturday evening (23) on the second day of the USA Indoor Championships in Albuquerque, New Mexico.

The 39-year-old Lagat shadowed Rupp and the rest of the contenders in the men’s 3000m until breaking away on the final lap to win in 7:46.01.

“I wanted to keep next to him (Rupp) until only like a lap-and-a-half to go and then go all out without looking back and that’s what I did,” Lagat said.

The win was Lagat’s fourth US indoor 3000m title and qualifies him for the IAAF World Indoor Championships in Sopot where he hopes to defend his title next month.

“What I have to do is do what exactly what I did tonight,” Lagat said. “This is like a championship race. That is exactly the time that wins the championships. If I run smart and I keep an eye on the guys that are tough – the few Ethiopians I have been watching and the Kenyans – I think I will be safe. I'm going to use that strategy I used tonight to make sure that I get the gold medal in Poland.”

Behind Lagat, Rupp found himself in a fight for the final qualifying spot for the World Indoor Championships. After going to the front with three laps remaining, he trailed both Lagat and Ryan Hill on the last lap before rallying past Hill to finish second in 7:48.19.

“Obviously it’s a little nerve wracking being in third with a lap to go,” Rupp said. “I just tried to stay relaxed and focus on my mechanics and drive all the way through to the finish.”

Adding intrigue to the final 200 meters was the presence of lapped runners, who occupied most of lane one as Lagat, Rupp and Hill sprinted to the finish. Lagat was forced out to lane two in the final curve as all three tried to weave through the slower athletes.

“It was a little crazy. It was probably a little bit too big,” Rupp said. “It’s something that everyone else had to deal with too, so again I just tried to pick my lanes and again, stay composed and focus on my finish.”

There was more late-race drama in the women’s 3000m. Gabe Grunewald sprinted past Shannon Rowbury on the last turn and was originally declared the winner in 9:23.15. However, after a protracted protest process, she was disqualified.

Grunewald made contact on two separate occasions on the final lap, first with Jordan Hasay with 150 meters remaining, and again with Rowbury at the end of the back straight. Rowbury went on to finish second in 9:25.49, while Sara Vaughn caught Hasay in the final fifty meters to place third.

“Jordan and I were both making a move. I was planning on following her and she slowed down so I tried to go around her and there was some contact,” Grunewald said immediately after the race, before the disqualification was announced.

“It was not purposeful on my part. It gets really tight on the turn.”

After the race, Rowbury downplayed the contact, saying it was “nothing that I felt was really throwing me off my game that much.”

With Grunewald’s disqualification, Hasay is poised to join her teammate Rowbury on the World Indoor Championship team by virtue of being the next-highest finisher with the qualification standard.

As of Saturday, Grunewald is still listed on the official meeting results with a notation that “results will be officially posted on Sunday”.

In the other finals on Saturday, Gray Horn won the men’s heptathlon and set a personal best of 6071 points, while Olympic silver medallist Erik Kynard won the men’s high jump, clearing 2.30m.

Tyron Stewart leaped 8.22m to win the long jump with his final attempt. Before that, he had been sitting in second place with 8.07m as just one centimetre separated the top four. World indoor triple jump champion Will Claye placed fifth in the long jump with 7.83m after suffering an injury midway through the competition.

Mark Hollis won his second national indoor title in the men’s pole vault with a mark of 5.55m. In a close women's long jump contest, Tori Polk clinched the victory with her fifth-round leap of 6.70m.

Hudler Nia Ali highlighted the preliminary action. The 2013 World Championships representative ran a world-leading time of 7.88 to lead all qualifiers in the 60m hurdles.

Battling a cold, world silver medallist Nick Symmonds advanced to the final of the men’s 800m. Erik Sowinski, Robby Andrews and Mark Wieczorek were the other heat winners and are all expected to contend for World Indoor Championships berths on Sunday.

“Sowinski looks unstoppable and I feel totally beat up, so I just have to go in there and duke it out,” Symmonds said.

The women’s 800m qualification was led by Chanelle Price who won her heat in 2:02.71. Ajee Wilson and Molly Beckwith also won their heats comfortably and advanced to Sunday’s six-woman final.