Kazakh triple jumper Roman Valiyev provided the top performance of the opening meeting of the 2013 Asian Grand Prix circuit when he bounded out to 17.10m at the Thammasat University Stadium in Bangkok here on Saturday (4).

The 2006 Asian Games silver medallist had his second best jump ever, behind his personal best of 17.20m at Almaty last year, in winning in the Thai capital for the second successive year.

India’s Renjith Maheswary and Arpinder Singh finished second and third behind the jumper from Kazakhstan with 16.83m and 16.74m respectively.

However, Indian athletes had a profitable day elsewhere, winning four of the 18 events.

One of the most impressive performances came from the 22-year-old 400m specialist M. R. Poovamma, who clocked 52.97 and was just shy of her recent best of 52.75 set 10 days ago on home soil in Patiala.

In the men’s track events, perhaps the highlight was Kuwait’s Abdulaziz Al-Mandeel victory in the 110m Hurdles in 13.66.

Al-Mandeel, a winner at two of the three Asian Grand Prix meeting last year including in Bangkok where he set his current national record of 13.58,, beat India’s Siddanth Thingalaya by a good margin in the high hurdles.

The Indian, who trains under London 2012 Olympic Games champion Sally Pearson’s coach Sharon Hannan, in Australia, was, like many other athletes in Bangkok, gunning for an IAAF World Championships qualification mark but could only manage 13.88 against the B standard of 13.50.

The 22-year-old Indian owns the national record for the event at 13.65, which he ran last June in Brussels, but this was his first raced since that outing owing to a hamstring injury.

In the absence of the leading putters in Asia, and despite the presence of India’s 2009 Asian champion Om Prakash Singh, China’s Wang Like won the men’s Shot Put title with an 18.91m effort.

Prakash was far from his best form and finished sixth with  17.68m. He went over 20 metres twice last season but this year his best has only been 18.91m.

Uzbekistan's Darya Reznichenko provided the best performance in the women's field events when she won the Long Jump with a leap of 6.52m.

Kazakhstan’s Viktoria Zyabkina was the fastest woman in the 100m, winning the second of three races in 11.61.

Guo was the lead-off man for the China team that set a men’s 4x100m Relay national record of 38.38 at the Olympics last summer but, on this occasion, the Chinese quartet were rather short of that mark when winning in 39.63. The host nation Thailand won a separate race in 39.74.

BACK
Pages related to this articleAthletes
Roman Valiyev 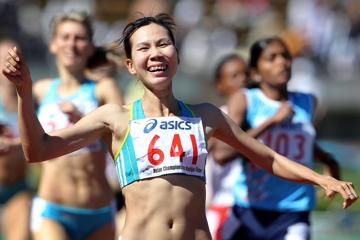