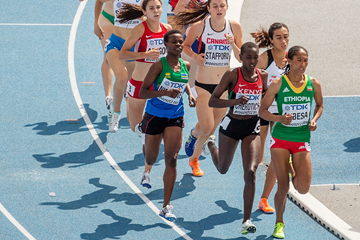 Ethiopia claimed gold and silver for the second championships in a row with Adanech Anbesa and Fantu Worku outpacing the six runners who remained in title contention with 200 metres remaining.

Anbesa’s victory completes the Ethiopian whitewash in the middle and long distances on the women’s programme with Beyenu Degefa and Kalkidan Fentie winning the 3000m and 5000m respectively.

By contrast, the Kenyans came away empty handed – just as they did in the 3000m – with Winfred Mbithe losing out in the battle for the bronze medal against USA’s Christina Aragon. Their best showing on the flat was a silver medal from Immaculate Chepkirui in the 5000m yesterday morning.

While the men’s final was a slow and tactical affair where elbows were required, European U20 champion Bobby Clay – who comes from a solid cross-country background – made it respectable from the gun, passing 400m in 67.63 and 800m in 2:14.96.

But the Ethiopians who sat in the pack in the early stages moved up into the top two positions – Anbesa and Worku in that order – as the bell sounded with 3:04.50 on the clock.

While the Kenyan challenge began to wilt on the last lap, Alexa Efraimson kept the USA’s title hopes alive as she challenged for the lead with 200m remaining, but the fastest athlete in the field with a 4:03.39 lifetime best couldn’t maintain her position.

Worku has finished second to Anbesa twice in big races this year – the other being the African Championships in Durban where she finished fourth in a race won by Caster Semenya – but the silver medallist is one year younger than Anbesa and is eligible to compete at the next edition of the World U20 Championships in Tampere in 2018.