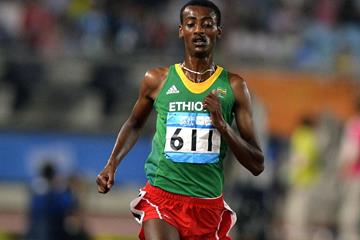 Yomif Kejelcha offered another exciting glimpse of his star quality by cruising to victory in the boys’ 3000m final on the penultimate day of athletics action at the Youth Olympic Games in the Nanjing Olympic Sport Centre Stadium on Sunday (24).

The tall, fluid-striding Ethiopian, who secured the world junior 5000m title last month, easily repelled a ferocious – and some might say foolhardy – early attack from Kenya’s Moses Koech to kick clear of the field with little more than three laps to go.

The 17-year-old Kejelcha could then afford to serenely ease to a processional win in a time of 7:56.20 – the second-fastest time by a youth athlete this year – albeit nearly a full 20 seconds behind the staggering time of 7:36.28 he posted at the IAAF World Challenge meeting in Ostrava in June, which sits second on the senior 3000m world lists this year.

His triumph brings to an end an impressive 13-month period in which the gifted Ethiopian has snared all three major age group global titles, a sequence kick-started by his 3000m gold medal at the 2013 IAAF World Youth Championships in Ukraine.

In a furious battle for silver, Theirry Ndikumwenayo of Burundi pipped Koech by 0.28 in 8:05.05, but there is little doubt that Kejelcha is a special talent and his future development will be monitored with great anticipation.

During the morning session, another African talent popped his head above the parapet to reveal a special running talent and then proceeded to entertain the crowd with his personal display of karate moves in the boys’ 1500m final.

Glibert Soet laid waste to the opposition with a scintillating last-lap performance to stop the clock in a world-youth-leading time of 3:41.99. The 16-year-old Kenyan left the crowd with something else to remember him by, a hitherto unknown talent for mirroring martial arts moves.

The pre-race favourites struck gold in the 200m A finals with US sprinter Noah Lyles securing a comfortable victory in the boys’ race and Natalliah Whyte ensuring Jamaican gold in the girls’ equivalent.

On a cooler night in Nanjing, Lyles could not quite match his personal best of 20.71 from the heats but, running from lane seven, he proved too good for the rest, crossing the line for gold in 20.80.

Chad Walker of Jamaica crossed the line second but was later disqualified for running out of his lane and Botswana’s Baboloki Thebe was awarded silver in 21.20.

Lyles said of the USA’s first athletics gold medal in Nanjing: “Coming in with a big target on your back, there’s always pressure. But you can’t worry about it. You've just got to run your own race and do the best you can. My father, who coaches me, would be at home screaming with brothers going crazy in the house telling everybody just what I did.”

White, who had placed seventh in the 200m final at last month’s World Junior Championships, said she was “overwhelmed” to take gold in 23.55, 0.39 clear of Ukraine’s Dzhois Koba.

Koba’s silver in the morning session preceded a memorable evening for Ukraine who took two shock gold medals in the evening stanza.

Halasz, who hurled the hammer a monster 87.17m for a world youth best in May and was the owner of the 14 longest youth throws in the world this year leading into the final, could only summon a best of 81.90m as Piskunov advanced his personal best by more than two-and-half metres to take gold with 82.65m.

His compatriot Yuliya Levchenko vowed “to party” after earning a stunning success in the girls’ high jump by bettering her pre-final best of1.83m on three occasions to edge France’s Nawal Meniker, with her second-time clearance at 1.89m securing the gold medal.

“A personal best in the final was more than I dreamed of. I have so many emotions, I can’t understand it,” was Levchenko’s response to a dramatic and unexpected gold medal.

Just a month after securing the world junior shot put title, Pole Konrad Bukowiecki proved unassailable in the under-18 age group as he hurled his implement out to a world-youth-leading mark of 23.17m to ease to gold.

As a further measure of the magnitude of his performance, it was the fifth best performance by a youth in history and added to his 2013 world youth title.

Nozomi Takamatsu proved far too strong for the rest while setting a personal best of 9:01.58 to triumph in the girls’ 3000m from Germany’s Alina Reh, who took the silver in 9:05.07.

Earlier in the session, Minoru Onogawa celebrated Japanese gold after circling 25 laps of the track in a lifetime best of 42:03:54 to take gold in the boys’ 10,000m race walk, more than seven seconds clear of Russia’s Vladislav Saraikin.

It could not have been any tighter in the final of the girls’ hammer as home thrower Xu Xinying pulled out a final effort of 68.35m to exactly match the best performance of Australia’s Alex Hulley.

However, much to the delight of the home fans, the Chinese athlete was awarded the gold by virtue of a superior second-best effort.

As predicted, world youth leader and world youth silver medallist Alena Bugakova was far too good for the rest of the field in the girl’s shot, winning with 18.95m.