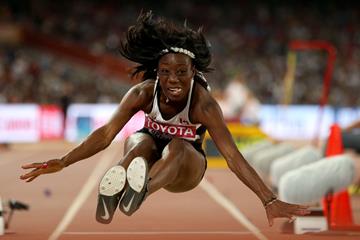 Commonwealth long jump champion Christabel Nettey identifies a special win on home ground and a painful 2016 season for her high and low moments.

Without a doubt, winning the 2015 Pan American Games title in front of my grandparents in Toronto was one of the highest moments of my career.

The previous year I had moved from college to join the Altis Training Centre in Phoenix, Arizona. That season, my coach Dan Pfaff broke down my entire jump and we rebuilt it from scratch. All that work paid off because in the following season (2015) things clicked. That indoor season I added 20 centimetres to my PB, jumping 6.99m, and I was able to match that same jump outdoors on a few occasions.

The Pan American Games was an exciting meet for many reasons. Most of my family – including my mom, grandparents, sisters, aunts and cousins – were there to watch me compete. It was a special moment for my grandparents to be there because they had never seen me compete at that level. My family had seats very close to the long jump and I remember hearing my aunts shouting my name while I was on the runway.

I felt relaxed the entire competition and just wanted to put on a good show (Nettey won the competition by 21 centimetres with a best of 6.90m and produced the longest four jumps of the day). The Pan American Games was also my first gold medal at a senior international championship.

Being able to stand on top of the podium and hear the Canadian national anthem play with my family present was a once-in-a-lifetime opportunity that I'll always remember. It felt like the start for me and gave me confidence heading into the World Championships in Beijing the next month.

My lowest moment was my entire 2016 season.

I was hoping to build on the progress I'd made the previous season, but severely failed to do so. During fall (autumn) base training, I pulled my groin which interrupted my training for almost a month and prevented me from competing during the indoor season. As a result, I missed out on the 2016 World Indoor Championships.

I returned to fitness and was in great shape leading into my outdoor opener in April. However, in my first competition I re-tore my groin. During this, the stress of achieving the Olympic qualification standard was weighing on me.

Although I was selected, I did not feel the positive emotions that I'd expected after being named to my first Olympic team. My Olympic experience was far from what I'd imagined it would be, and although I'm happy to be an Olympian, my experience and performance was very disappointing (Nettey finished 20th in qualifying and failed to advance to the final).

I cried a lot that night, reflecting on the competition, the season, and my life. A lot of things happened during that season that affected me mentally but I was never able to address them because I was determined not to be derailed from my goal of making the Olympic team. Unfortunately, the pressure of ignoring my emotions took its toll and negatively affected me. Although it was challenging, it was a year of learning and growth.