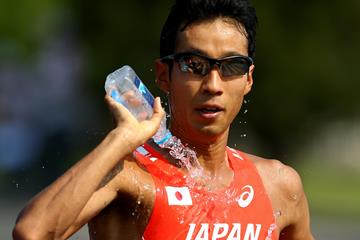 Japan’s Olympic 50km race walk bronze medallist Hirooki Arai has emerged as a world-class performer over the past few seasons. Here the 28-year-old explains the challenge he faced after missing out on qualification for the London 2012 Olympic Games.

"My greatest challenge was reassessing my athletics career after the disappointment of missing out on qualification for the London 2012 Olympic Games. The previous year I had competed in the 50km race walk at the World Championships in Daegu (Arai finished ninth) and set a personal best of 3:48:40. I had the momentum and I was determined to go to London the following year.

"Yet during the Olympic Trials race in Wajima I was struggling with anaemia/iron deficiency due to over training. I simply did not have what it took to be on the national team and I finished sixth. Post the trials, I continued to train but with the target of the Olympic Games gone, I lost focus in my training. I didn’t want to think about race walking.

"When I watched my rivals race at the London Games on TV, that’s when my desire to be at the Olympic Games became even stronger. I wanted to be at the Rio Olympics no matter what it took, but to achieve that goal I realised something needed to change. At that point I made the decision to transfer clubs and I moved from the Ishikawa Prefecture to join the Physical Training School of Japan Self Defense Force in Saitama Prefecture.

"I think this was a turning point in my career. After joining the Physical Training School, I had coaches and support staff that truly helped my training and I was also able to use some top-class training facilities. At my previous club, I had to cook for myself but at the PTS they provided a well-thought out nutritional plan for the athletes. I enjoyed great physical and medical support and I was also working with other international athlete from sports such as wrestling, boxing and shooting, which kept my motivation high. The quantity and quality of race walking was far greater at the PTS but they also encouraged me to do more weight training and stretching than before.

"I qualified for the Japanese team to compete at the 2013 World Championships in Moscow. When I finished 11th in a PB of 3:45:56, I realised I had made the right decision moving to the PTS. I knew there was more to come and I could become even better. Based out of PTS and under the coaching of Olympic national team coach and Olympian Fumio Imamura, I have adopted a more scientific approach to training. I have continued to improve, finishing fourth in the 50km race walk at the 2015 World Championships in Beijing and then winning 50km bronze at the Rio Olympics."