It was as the men’s 400m field exited the final bend in last Friday night’s IAAF Diamond League meeting in Monaco that a tantalising glimpse of the Post-Bolt athletics world was revealed.

Having made a point of catching and passing Isaac Makwala midway down the back-straight, South Africa’s world and Olympic champion Wayde van Niekerk discovered that the job was not done as the Botswana athlete in the pale blue vest to his right, arms pumping, was now actually edging ahead.

The 25-year-old world record holder, whose first two races of the season – a 300m world best of 30.81 and a 400m in 43.62 – had been relatively unopposed victories, suddenly found himself in a harsher environment, and responded as champions do.

Without losing his form, Van Niekerk moved ahead once again to win in 43.73, although the puffing of his cheeks testified to the late effort that had been required.

Metres beyond the finishing line, the two men had their arms over each other’s shoulders, emphasising that this is a relationship involving sportsmanship as well as rivalry.

The Botswana athlete is five years Van Niekerk’s senior – indeed, he is only a month younger than the imminently retiring Bolt. But unlike the Jamaican sprint legend, Makwala, whose first IAAF World Championships were in 2007, clearly feels he has important things still to achieve in his career.

With the 200m still to run in Madrid, he had told the press: “I’m satisfied, but I know I can run faster. My goal in London is the gold medal; I can do it.”

In the immediate aftermath of his run on the Stade Louis II track, he was even more expansive: “This race felt good from start to finish. I have now decided I will be doubling 200 and 400 in London.”

So Van Niekerk will have swift company in both the events.

Van Niekerk: ‘We are still not peaking’

“It was great performance today, I’m feeling positive about it,” the South African responded after the race. “My body feels to be in great shape and this win from behind gives me lot of confidence.

“We still are not peaking, we trained hard last week, all should be OK for London and my double. I was forced to change my plan when I saw Isaac in front in last 100m. All went well. Now we’re ready for the big plan.”

At the previous day’s press conference, Van Niekerk had said he had held a little back in both of his previous 2017 outings. He had no such leeway in Monaco – and will surely not expect it in London either.

Asked about Makwala’s Madrid double, the South African provided a response that sportingly acknowledged the quality of his rival’s effort while also underlining his own determination to do better.

“It’s not the first time he’s done it,” Van Niekerk said.  “I’ve got lots of respect for him planning to double up. The times he has run and what he did in Madrid show the quality he has as an athlete. It’s something you can’t take lightly. At the same time it’s something you can use to improve your own performance.

“So I’ve got the utmost respect for Isaac, and I’m sure we can continue improving one another’s times. It’s the kind of competition that’s good for the sport.”

Makwala’s first experience of a global championship in Osaka was as a member of Botswana’s 4x400m relay team, which was knocked out in the heats. Ten years on, the Botswana quartet will arrive in London with strong chances of finishing on the podium at least.

In Beijing two years ago, Botswana – boasting London 2012 800m silver medallist Nijel Amos, Makwala’s friend and sometime room-mate, missed a place in the final by one place as they set a national record of 2:59.95.

Now their team has been strengthened by the addition of 20-year-old Baboloki Thebe, who finished third in Monaco in 44.26 and looks a huge prospect for the coming years.

In the meantime Makwala will doubtless be reflecting again upon one of his favourite pieces of advice from his coach, Justice Dipeba, who regularly reminds him: “Champions are not born, champions are made.”

Makwala added: “I like this because he is saying anything can be achieved through training hard and hard work.” It looks as if all of this Botswana athlete’s hard work is about to pay off in London and beyond. 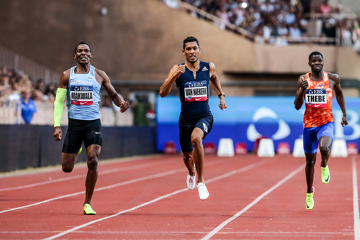 Van Niekerk pushed all the way in Monaco – IA... 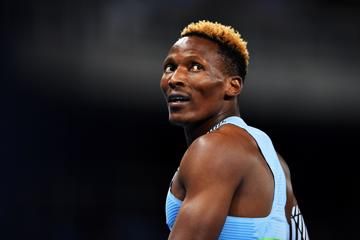