Filbert Bayi en route to the world record in the 1500m at the 1974 Commonwealth Games in Christchurch, New Zealand (© Getty Images)

But following a chance meeting with some Olympic icons and a tour around Africa, the US athlete-turned-coach found his true calling when he linked up with Filbert Bayi.

Born in 1941 in New York City, Davis didn’t have the easiest start in life. When Davis was four, his father was imprisoned for armed robbery in New Jersey. Once released from prison, he remarried, and Davis at age 12 moved in with him.

“It was in Virginia that I experienced southern-style segregation and racism,” recalls Davis. “I learned to say, ‘Yes sir’ and ‘No sir’, to not look at a white woman, drink out of fountains or go to a bathroom where signs said ‘colored’ or ‘black’, and I could only attend an all-black school.”

Living with his mother while attending high school, Davis was a great basketball and baseball player, but the training field for the high school baseball team was too far away to attend daily practice. With no money to cover transportation, he started taking part in athletics. He excelled in long distance races and ended up with the sixth-fastest mile time in the country when he broke a 24-year-old record at the Brown Invitational.

Davis received dozens of university scholarship offers at a time when a common misperception was that black people could not run farther than 400m. He attended San Jose State University in California and became an All-American, forming a key part of the history-making 1962 NCAA Cross-Country Championships team—the first racially integrated team to win the division one (then called the university division) title.

From 1968-1969, as a student assistant coach at his alma mater, he crossed paths with Tommie Smith and John Carlos, the 1968 Olympic 200m gold and bronze medallists. The two men had been forced back home by the then United States Olympic Committee (USOC) for their human rights protest on the medal podium and were later ostracised and received death threats. But, having been inspired by their actions in Mexico City, Davis got to know the men personally and, along with Lee Evans – another Olympic gold medallist and civil rights activist – spent a lot of time with them.

Davis’s connection with Africa started in the early 1960s. During the height of the Cold War between the US and the Soviet Union, Davis embarked on a goodwill tour around Africa in 1964 as part of the US team. Through competing at meetings and hosting clinics, organisers of the goodwill tour wanted to show that life in a democratic country such as the USA was better than in the Soviet Union.

The team toured Mali, Burkina Faso, Niger, Benin, Ghana, Guinea, Sierra Leone and Algeria. At one of the clinics, a student in the audience asked Davis: “Why are black athletes called ‘Americans’ during the Olympics, but before and after the Games they are called ‘negroes’ and treated as second-class citizens, facing racism and difficulty getting housing and employment?”

The question struck a chord with Davis. He took a greater interest in colonial Africa with its struggles for independence and this later led him to coaching in Nigeria, Mauritius, Tanzania, Sudan, Somalia, Djibouti, Mozambique, and being a Fulbright lecturer in Brazzaville, Congo.

A decade later, Davis and Evans were the national athletics coaches for Nigeria. Several African countries boycotted the 1976 Olympic Games in Montreal because the IOC refused to ban New Zealand after their national rugby team toured apartheid South Africa. In 1978, Nigeria decided to boycott the Commonwealth Games in Edmonton for the same reasons. Davis, directly impacted by the boycotts, was fortunate to meet Tanzania’s Minister of Culture and Sports who hired him as the national athletics coach for Tanzania in 1979.

Filbert Bayi was Tanzania’s star athlete at that time. In 1974 he made international headlines when winning the Commonwealth 1500m title in world record time. Considered one of the greatest 1500m runs of all time, Bayi took the lead from the start and kept it until the finish line as he broke the world record with 3:32.16 in what was his fifth race within seven days. A year later, Bayi broke the world record in the mile, clocking 3:51.0 in Kingston, Jamaica.

When Davis was first hired as Tanzania’s head coach, Bayi was injured and receiving treatment in Germany. When he returned, Bayi – who was coachable, disciplined, and trained hard – willingly accepted Davis’s coaching system.

Had Tanzania not boycotted the 1976 Olympics, Bayi would have been a medal favourite in the 1500m. When the next Olympic year came around, Bayi decided to move back to the steeplechase, an event he hadn’t contested since exiting the heats of the 1972 Olympics as an U20 athlete.

The early signs during the 1980 season were promising. Bayi won the steeplechase at the DN Galan meeting in Stockholm in 8:17.98, which was the world-leading time ahead of the Olympic Games in Moscow.

Full of confidence and determined to win a medal for Tanzania, Bayi set off at world record pace in the Olympic final. He passed through 2000m in 5:20 – inside the world best for the 2000m steeplechase at that time – and at one point had a 30-metre lead over Poland’s Bronislaw Malinowski, the Olympic silver medallist in 1976. With fatigue setting in, Bayi’s lead had reduced to just five metres with one lap to go. He was inevitably caught by Malinowski but held on to finish second in a national record of 8:12.48, earning Tanzania’s first ever Olympic medal.

“Ron Davis is a hero to me because of [my] silver medal while he was coaching me,” Bayi said in a 2019 interview with SpeedEndurance.com. “I’ll never forget that. I went through ups and downs with him and we are still friends.”

Decades later, when he was tasked with reviving athletics in his country, Bayi once again called upon his friend Davis. “He is the only person that brought Olympic medals to Tanzania.”

In the early 1980s when Atlanta was considering bidding for the 1996 Olympic Games, the co-chairman of the event, former UN Ambassador and Mayor of Atlanta Andrew Young, contacted Davis. The connection developed into Atlanta hosting 80 athletes from 11 countries in a pre-Olympic training camp prior to the 1984 Olympic Games. Davis was responsible for 11 teams, nine of which were from Africa.

Years later, Davis was founder and director of the LaGrange pre-Olympic training camp ‘I Train in LaGrange’. It welcomed more than 500 athletes from 45 countries – many from Africa – before the 1996 Atlanta Olympics.

Training at the Filbert Bayi Sports Complex in Tanzania

“There is no doubt in my mind, as I experienced lobbying for Atlanta to win the 1996 Olympic Games, that what Atlanta did in 1984 had an impact in the city winning the bid,” says Davis. Historically, LaGrange is a former cotton mill town where many African people had been slave labourers. Sadly, what could have become an Olympic legacy after the Games was stopped.

In 1992, while South Africa was in the process of reinstatement into the Olympic movement, the IAAF (now World Athletics) organised sanctioned meets in Dakar and in Johannesburg, opposing South Africa and the rest of Africa. Davis was appointed coach of the African team and arranged for the visiting athletics delegation to meet presidential candidate Nelson Mandela.

“As soon as Mandela entered the room, his spirit just took over the whole meeting,” recalls Davis. At the press conference, Mandela apologised to the athletes and Africa’s sporting officials for how the sports boycott of major international events had affected them because of the apartheid policies in South Africa. The event marked the reconciliation between South Africa, the African continent and the international sporting community.

In 2018, Bayi invited Davis back to Tanzania and together they tailored the programme ‘2020 and Beyond’, the primary objective of which is to scout, train, nurture and prepare talented athletes in a country whose last Olympic medal came 40 years ago.

“I will be forever grateful to Filbert Bayi for bringing me back home,” says Davis. “I have always dreamed of spending the rest of my life in Tanzania.”

Davis believes that the country has talented runners, but they rarely get discovered. And when they are, they are often “lost in transit”. Focused on the Paris 2024 Olympic Games, he has identified a few potential stars in Tanzania, including middle distance runners Regina Mpigachai and Gaudencia Maneno, sprinters Benedicto Mathias and Matiko Nyamaraga, and soon-to-be 800m specialist Amos Charles.

Funding for Bayi’s schools and foundation remains a challenge but they desperately desire an all-weather training track for the school.

Now aged 79, Davis has finally found peace in Africa and continues his work as a sports developer, both on track and off it.

Myles Schrag, a writer who is working on Davis and Bayi’s memoirs, describes Davis as “extremely giving, accomplished and passionate about people”. Throughout his sports career, he has pushed for athletes to get an education because, “with education, they can return home one day and contribute to national development in their countries”.

Davis recently helped Regina Mpigachai, one of his athletes, prepare for her TOEFL exam, because he has witnessed first-hand the importance of passing on knowledge to the younger generation.

“They (Bayi and other athletes with whom he has previously worked) have adopted my philosophy and are giving back by offering free education to the youth and potential student-athletes in their countries to get sports scholarships to universities,” says Davis.

Bayi, meanwhile, gave Davis the greatest gift an athlete can give a coach: an Olympic medal, a new home and an opportunity to pass on the passion of athletics to the next generation of Tanzanian athletes.

“What goes beyond the expected,” says Davis, “is what we do for others without asking anything in return.” 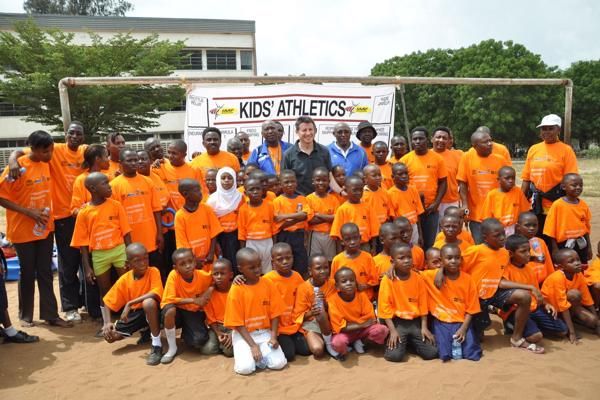 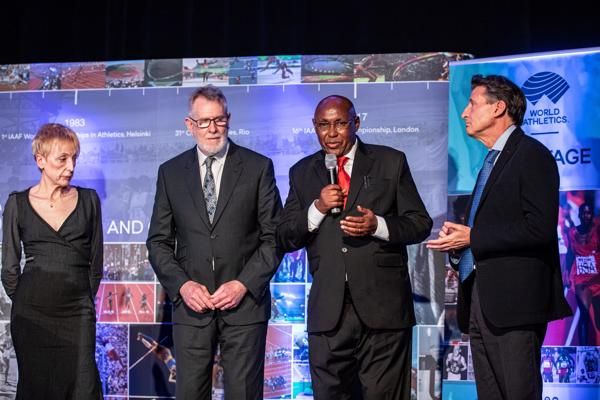