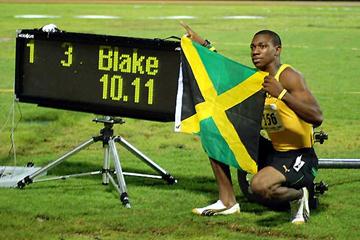 Yohan Blake won the Carifta Games Under-20 title in a Jamaican Junior record of 10.18 in the first round and lowered it to 10.11 in the final. (Anthony Foster) © Copyright
08 APR 2007 General News Turks & Caicos

Turks & CaicosRecords were falling "like flies," as one coach put it, on the opening day of CARIFTA XXXVI (Sat 7), being held for the first time in Turks & Caicos, at that territory's newly built National Stadium.

To be specific, the Games are being held on Providenciales, or Provo, as it's known to the "Belongers," natives of this eight-island British Crown Colony. A stone's throw from the Bahamas, 90 miles north of Hispaniola and 550 miles southeast of Miami, Florida, the population of the Turks & Caicos Islands numbers a mere 27,000.

IAAF President Lamine Diack as guest of honour, along with close to 10% of the islands' populace turned out at the 3000 seat stadium for the opening day, on which afternoon showers did not stop records tumbling in the Shot Put, High Jump, 1500m and 100m. In two events, High Jump and 100m, records fell in two divisions.

As expected, Jamaica leads the medal table after day 1, with 25. However, the total is boosted by 12 gold discs, to go with seven gold and six bronze. Trinidad & Tobago has four gold, two silver and four bronze; Barbados 3, 2, and 1; Bahamas 3, 1, and 1.

But no medal would have been more impressive than Yohan Blake's in the under-20 men's 100m dash. The young sensation from St Jago's High School ran a personal record 10.21 seconds last weekend at his inter-scholastic championships, and he came into Provo with something to prove.

"My aim is to go out there, run fast and break the Carifta Games record from the heat and in the final," he confirmed the evening before the Games, even before he had laid eyes on the track, much less put spikes to rubber.

In the event, he did not spend much time on the fresh laid Mondo surface, destroying the competition in the morning heats with a run of 10.18 seconds, four hundredths of a second better than Darrel Brown's then-CARIFTA record for Trinidad & Tobago in 2002. Keep in mind that Darrel went on to set the World Junior record in his event the following year. Then factor in the fact that Blake went on to run an unchallenged 10.11 in the evening final, a relaxed and easy run with a 1.2 metres per second trailing wind.

"This meet is alright," said the World Junior Championship 100m bronze medallist after one of the all-time great performances by an under-20 athlete. "But I want somebody to push me to run faster. Because I know I can run faster, I just need somebody to run with me."

Keston Bledman of Trinidad & Tobago, who was considered Blake's main rival for the title coming into the meet, ran a mere 10.41 in the final. After qualifying with a 10.45 in the heats, Nyls Nubret of Guadeloupe ran 10.51 in the final for third.

In the under-17 100m, another Jamaican dropped Darrel Brown into second position. Dexter Lee demonstrated that he is likely to be a major draw this summer at the 5th IAAF World Youth Championships, Ostrava, Czech Republic**.

Lee, 16, powered across the line to stop the clock in 10.34 seconds, taking two hundredths of a second off the time run by Brown in 2000. That's the sort of time Blake was running in 2006, so don't discount the possibility of Brown's 10.24-second World Youth best going as well.

Lee, a student at Herbert Morrison Technical, had a 1 m/s tailwind in the final, where he bested Warren Fraser of the Bahamas (10.51) and fellow Jamaica Jermaine Brown (10.65).

As described by one commentator, Lee, "tall, powerful and smooth... a beauty to watch," had run 10.67 seconds to win the opening heat in the morning session. Coming into 2007 with a personal record of 0.60, he'll be pleased to have done well on the biggest stage he will have before taking on the world in July.

The women's 100's provided less excitement than did the men's. Shakera Reece capped a solid opening day for Barbados, running 11.34 to beat Jamaica's Schillonie Calvert (11.61) and Crystal Bodie (11.63) into second and third in the under-20 final. Though Reese was well short of the CARIFTA record, she did set a Rice University record. The Queen's College (Barbados) grad is a freshman at the Houston, Texas institution. The under-20 women's 100 had trailing wind of 1.3 m/s.

Michelle Lee Ahye stopped the clock in 11.76 seconds to cop gold for Trinidad & Tobago in the under-17 category. Still just 15, Lee Ahye edged out Shanice Hazel (11.78 seconds) of the British Virgin Islands, with Antonique Canpbell (11.86) taking bronze for Jamaica. Lee Ahye placed eighth in the 100m final in this division in 2006, whereas Hazel just failed to make the final, finishing second in her heat and ending in ninth position overall.

Another new mark in the metric mile

Jamaicans broke other records earlier in the day, including one on which the ink had barely dried. Kemos Campbell undid another Trinidadian, Gavyn Nero, when he ran 4:00.04 and led one of three Jamaica 1-2's in the 1500m events. Campbell's run gave him the slightest of wins in the under-17 division, in a stirring finish over fellow countryman Donahue Williams, who ran 4:00.73, as both boys dipped just under Nero's 4:00.78, the CARIFTA record he set in 2006. Matthew Spring (4:01.04) was third for Bermuda.

Meanwhile, Nero, who had found himself in hot water with his national team last week, made good by stepping up to the under-20 division and picking up right where he had left off last year. Nero's time of 4:01.46 was obviously short of his best, but it was more than enough to prevent further Jamaican domination. Andre Thomas (4:02.30) and Conroy Crossman (4:02.60) ended in second and third positions, respectively, in another keenly contested race.

Last year, Jamal Wilson (under-20) and Raymond Higgs won the High Jump in their respective divisions, but the Bahamians had some unfinished business, which they've now dealt with conclusively. Wilson and Higgs not only repeated as champions in Provo on Saturday, they each established new records. Higgs erased a mark that had stood since 1992, but Wilson's new record replaces a mark that was established as far back as 1986.

In the under-17 category, Higgs won the event early from Jamaicans Jovan Hardware and Machell Baker. The two Jamaicans could not manage better than 1.95m, and with identical efforts going up to that height, they were jointly awarded second place. But Higgs passed at 2.00m, clearing on his first attempt at 2.03m before trying for the record at 2.11m, thus eclipsing the 2.10m posted by Jamaica's Ryan Chambers 15 years ago. Higgs also went over first time at 2.13m but at 2.15m he missed all three attempts.

Meanwhile, in the evening session, Wilson too had to see off a Jamaican rival, Julian Reid, after Barbados' Therrold Murray's 2.00m clearance was good enough only for third. But although Wilson needed three tries to Reid's one at 2.08m, it was the Bahamian who made it over 2.15m at the third attempt. Next up was the meet record, 2.19m (Joel Vincent, Martinique), which Wilson sought to raise with an attempt at 2.20, at attempt at which he was successful on his first try. After two failed tries at 2.24m, the champion retired.

The horizontal jumps saw a repeat performance for Anguilla's Shara Proctor in under-20 Long Jump. Shara had a best effort of 6.17m to hold off Tameka Williams (6.14m) of St Kitts-Nevis and Arantxa King (6.09m) of Bermuda. It was the same distance Proctor cleared in 2006, and having done 6.24m in 2005, she might have been expected better. Audillia Da Veiga cleared 5.75m to win the under-17 title for Martinique, beating Chantel Malone (5.54m) of British Virgin Islands and Ericka Cambrone (5.49m) of Guadeloupe.

Trinidad & Tobago's Quincy Wilson removed Jamaica's Kimani Kirton from the top of the CARIFTA leaderboard in the under-17 Shot Put. The bronze medallist last year, Wilson declared his intentions from his first trial, 15.84m, which would have been enough to win the competition this year or the last. In fact, all but Wilson's last effort could have earned him gold. Having recognised that he was competing in a different class, he set about attacking Kirton's mark of 16.07m from 2000.

He got it on his firth try, his only effort above 16m. The 16.27m gold medal mark was more than a metre better than that established by the young man in second, Aruba's Shane Nedd, who pushed the ball 14.96m in the fourth round. Nedd ended up splitting a medal-winning duo from Trinidad & Tobago, as Robert Collingwood had a fourth-round effort of 14.57m to take third, his only mark of 14m or greater.

Barbados' Deandra Dottin got her CARIFTA campaign underway with what she surely anticipates will be the first of two gold medals. The 2006 Javelin Throw champion in the under-17 division, Dottin pushed 11.00m on her first trial, establishing the lead early and opening it up in the third round with 11.48m, which was good enough to capture silver for her last year. On her next trial, she threw 12.26m, well ahead of the 10.66 and 10.59 efforts from Jamaica's Candicea Bernard and Guadeloupe's Angeline Verdot.

The third throw contested on day one was the under-20 Discus Throw, which was won by Jamaica's Raymond Brown. A small field (just four competitors) was led by Brown's 49.95m, with Trinidad & Tobago's Emmanuel Stewart (48.04m) holding onto second place. Jhovanie Legendart had an early mark of 47.39m to take bronze for Martinique.

The 400m races did not produce anything spectacular. Grenada's Kirani James was timed at 47.86 seconds in the under-17 division. The highly touted 14-year-old beat Kadeem Smith (48.00) of St Kitts-Nevis and Dwayne Exrol (49.01) of Jamaica for the age group title. James will also be contesting the 200 later this weekend.

Just fourth last year, Zwede Hewitt improved by half a second to win the quarter-mile title in Provo. The 19-year-old from Trinidad & Tobago stopped the clock in 47.14 seconds, good enough to relegate Jamaica's Oshane Barham (47.28) into second place, while Trinidad & Tobago mile relay teammate Ade Alleyne- Forte (47.31) had to settle for third.

The men's open Heptathlon stands well poised after four events. Jamaica's Andrew Riley started off with a 14.44 in 110m Hurdles, one of just two athletes under 16 seconds, along with barbados' Shane Brathwaite (15.61 seconds). But whilst Riley dropped off badly with a best mark of just 5.96m in Long Jump, Brathwaite posted a consistent 6.51m, behind Rashad Clarke (6.78m) of Bahamas and Kurt Felix (6.54m) of Grenada. Felix then threw 60.66m in Javelin Throw to climb into second. But he relinquished that spot to Brathwaite after the latter ran 22.06 in the 200m. Clarke leads after day one with 2834, but on 2779 and 2774, Brathwaite and Felix are in striking distance.

Meanwhile, under-17 Long Jump champion Da Veiga leads the women's Pentathlon on 2086 after three events, with her pet event on day two. She won High Jump on the opening day, clearing 1.66m, whilst a cluster of competitors at 1.54m did themselves no favours in that event. In spite of a weak Shot Put - just 7.80m - Da Veiga is just ahead of Jamaica's Salcia Clark and Latanya Nation. Nation won Shot Put with 11.16m, but did poorly in High Jump, with just 534 points. Less then 100 points stand between fourth place and first, as Kierre Beckles of Barbados could also have a say in the outcome of this competition.

Terry Finisterre for the IAAF

Full qualification standards can be found by clicking here