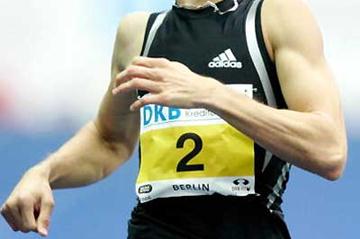 Six athletes came away with a share of the $1 Million IAAF Golden League Jackpot in front of a crowd of 48,101 spectators during this afternoon’s DKB-ISTAF Berlin, the finale of the IAAF Golden League 2006. But there were one or two surprises along the way especially the unexpected defeat of Tirunesh Dibaba in the women’s 5000m.

Winning a Jackpot purse of US $83,333 each for achieving FIVE wins were three athletes:

Asafa Powell, in contrast to his race in Brussels just over a week ago, got out cleanly at the gun and his 100m victory was never in doubt. The Jamaican was at the point of a spearhead of sprint power for most of the race as he powered to 9.86 in lane five. In the two lanes either side of the World record holder, Tyson Gay (9.96 – lane 6), and Leonard Scott (10.07 – lane 4), his nearest challengers provided the base of this formidably talented symmetrical formation that closed in on the line. Powell’s prowess was a joy to watch, his winning time equalling the meet record held by Maurice Greene.

Wariner never in danger, whatever we thought

LaShawn Merritt made USA compatriot Jeremy Wariner work for his money in the men’s 400m. The World Junior champion of 2004, whose first sport was baseball gave it his biggest hit at the gun and coming into the final bend had what seemed - the starting stagger is of course deceptive – about a 10 metres lead over the World and Olympic champion Wariner. Exiting, Merritt still had a couple of metres on the Jackpot contender, and another challenger Congolese Gary Kikaya. For a millisecond we contemplated a shock. We were of course deluding ourselves, as this was Wariner racing, the fourth fastest one-lap runner of all-time. With seemingly effortless acceleration he pulled away for the win in 44.26. Finishing the strongest of the challengers, Kikaya improved his own national record in 44.53, and Merritt came home for third (44.78).

No doubt either for Richards

With only a quarter of the women’s 400m race gone it was clear to even the most skeptical that Sanya Richards (USA) run for a sixth series win was in the bag. Not for one moment was the World silver medallist under threat this afternoon winning in 49.81 seconds, her fifth quickest of the summer. Dee Dee Trotter was well adrift in second (50.87).

Kenenisa Bekele produced a demonstration and a determination in the men’s 5000m which was absorbing for the viewer. Alone in front at 2km, the World record holder proceeded to build a margin of supremacy lap by lap, second by second, so that by the bell (11:58) he had nearly eleven seconds advantage over his pursuers. The final lap sprint brought his brother Tariku, the newly crowned World Junior champion, closer but Kenenisa’s victory in 12:57.74 to his brother’s 13:04.83 was as emphatic as it gets. The crowd rose to its feet in appreciation of a wonderful gutsy display; the public address system played “The Can, Can”, and as Bekele danced around the track in a lap of honour all we could say was “he did, did”!

Bekele summed up his supremacy, “this race was an easy one for me. Nobody followed me, not even the pacemakers. It was tough for them.”

It was a particularly tough afternoon for Tirunesh Dibaba, one of the Jackpot contenders setting out for a perfect set of six victories. Once again, it came down to a final lap sprint between the World champion, and her compatriot, the Olympic titleholder, Meseret Defar. Dibaba, had always prevailed in this dash for the line in the previous five Golden League meets but today as Defar closed on her shoulder with 250m to go, we sensed an upset as Dibaba didn’t immediately respond.

And a shock we got in dramatic style in the last 100m, as the two elfin Ethiopian figures battled their way home. Defar got the decisive edge, and the woman who only a couple of days ago Dibaba had called ‘her sister’ had suddenly deprived her of $125,000 extra helping of Jackpot cash. The finishing times were 15:02.51 to 15:02.87. Defar’s last lap was 56.4 seconds and Dibaba’s 56.9.

One jump secure the money for Saladino

So Dibaba ended up with five wins, joining her compatriot Bekele with his achievement, and near the end of the programme, Irving Saladino also secured the same season long feat with a first round 8.35m Long Jump. It took just one attempt for the Panamanian to win the competition, passing three of his jumps and fouling the other two. Greece’s Louis Tsatoumas challenged with his opener (8.30m, a season’s best) but he only got in one other measured effort (8.09m – 3rd round) in an overall dissappointing below-par event. Well, not disappointing for Saladino of course as he was $83,333 the richer for the win!

Sherone Simpson is increasingly looking and playing the part of a future World and Olympic champion, destroying the field in today’s women’s 100m with a 10.92 clocking. Her nearest opponent USA’s Me’Lisa Barber, across the finish in 11.21.

Choge and Shaheen show the specialists how it is done

Saif Saaeed Shaheen, the World 3000m Steeplechase champion and record holder, looking for a bit of interesting competition - something he is not presently able to find in his own event in which he is peerless - gave the milers more than a good run for their money. Into the final bend of the men’s 1500m, the Qatari was fourth and by the time the race was closed out only another non-specialist, Commonwealth Games 5000m champion Augustine Choge of Kenya, had fresher legs than Shaheen. Choge won in 3:32.48, and Shaheen was second in 3:33.51, both times were personal bests.

Michelle Perry, who won at the USA vs Russia match yesterday in Moscow understandably didn’t make the final start list here in Berlin. In the World champion’s absence Virginia’s Powell was the winner of the women’s 100m Hurdles in 12.72. It was close for the minor places with Jamaican Brigitte Foster-Hylton getting the edge over 2003 World champion Perdita Felicien of Canada, 12.80 to 12.81.

In the two other Golden League events which were worked to their season’s conclusion, European champion Tia Hellebaut of Belgium took another win in the women’s High Jump over Sweden’s World champion Kajsa Bergqvist, this time on count back at 2.00m. Then in the men’s Javelin Throw, Norway’s Olympic champion Andreas Thorkildsen prevailed once more over Finland’s Tero Pitkämäki, though the latter’s last round 87.11m nearly surpassed the Norwegian’s 87.43m lead.

Australian Steven Hooker won the Pole Vault in style with 5.96m but we nearly witnessed magic as his last attempt at 6.01m had the height for perhaps 6.05m but he came back down on the bar. Compatriot Paul Burgess was second (5.91m), and Germany’s Danny Ecker was third, his 5.81m third time clearance greeted by a huge roar of approval from the spectators.

In the men’s 110m Hurdles race, David Oliver brought home a USA sweep in 13.25, with veteran Allen Johnson continuing his good comeback from mid-season injury with a late run for second (13.29), and Aries Merritt, third (13.32). This was Oliver’s biggest ever career win, and his 40th (YES, 40th) race of the year!!

Franka Dietzsch, the World champion in the women’s Discus Throw, provided the only German win of the day with a second round release of 64.47m, enough to defeat surprise European champion Darya Pishchalnikova of Russia (62.17m).

But otherwise the host's national hopes were dashed this afternoon.

At the very start of the programme Czech Barbora Spotakova spoilt the opening for the home crowd as she propelled her javelin to 64.30m in the first round to defeat Germany’s European champion Steffi Nerius (64.22m – third effort). It didn’t get much better as a few minutes later another local hero Ralf Bartels was defeated by the 21.14m might of USA’s Reese Hoffa in the men’s Shot. Not a good start for Germany’s Gothenburg heroes. Bartels was third with 20.53m behind the Netherland’s Rutger Smith’s 20.63m.

Things didn’t get much better with the closing race, the men’s 3000m, as European 10,000m champion Jan Fitschen couldn’t match the expectation of the crowd, finishing back in sixth in a season’s best of 8:06.27. The winner was Jesús España of Spain in 7:56.36.

Still not even German disappointment could dent the joyful atmosphere on a such an entertaining afternoon of track and field.