Gebrselassie and Ndereba supreme over 15km in Melbourne

Beating a quality field which included World Championship and Commonwealth Games medallists, the World record holder for the Marathon Gebrselassie never looked in serious trouble. On the women's side, Kenya’s World Marathon champion Catherine Ndereba took the race out in 50:43, well clear of all those in pursuit, after making her move seven kilometres into the race.

The men's race was billed as a World record attempt, and while all eyes were on Haile Gebrselassie, Kenya's Patrick Makau Musyoki had also been confident of a fast time.

From the gun, it developed as a race between three, but inevitably it was all about ‘the Emperor’, Gebrselassie. By three kilometres, a pack of three had broken away from the others, including Gebrselassie, twice World Half Marathon silver medallist Makau, and Aussie Craig Mottram, the former World 5000m track bronze medallist.

All thoughts of attacking Felix Limo's 41:29 World record soon fell by the wayside, as no one forced the pace, and a tactical race began. Mottram gamely held on through 5km in 14:47, but when Gebrselassie decided to increase the tempo at 6km, only Makau could go with him. The great man began to pull away up the only incline of the course along Birdwood Avenue and through the botanical gardens. However, Makau closed the gap, using the downhill section of Andison Street to full advantage, and showing he was not yet through.

The second 5km was covered in 14:01, but when Gebrselassie again put the hammer down at the 11km mark, it was all over for Makau, who would finish 35 seconds adrift in 43:15. Gebrselassie powered home ahead, finishing with his fastest 5km split of the race in 13:54.

Australian Olympic representative Collis Birmingham ran impressively in the last 5km to come through the field, overtaking a tiring Mottram, to take third place in 43:35, while Mottram held on for fourth after following the leaders early on.

Gebrselassie had not been feeling the best: "It was not easy," he said after the race. "The weather is fantastic, the course is not bad - the only problem is that I could not sleep because of the jet lag. Especially yesterday, I only had 2 hours sleep. The competitors are very tough too, especially the Kenyan (Makau) and Mottram. After 11km I decided to stop him (Makau) there, otherwise it would be dangerous to take him up until the last 1km. I expected to run a good time, but when I got up in the morning, I did not feel so good."

Local Victorian boy Birmingham was very excited with his third place. "I started off pretty conservatively, and tried to finish strong," he explained. "It's the first time I've done 15km, so I was a bit surprised."

In the end the World record was not to be; it seems the jet lag involved with heading Down Under was a barrier not even the great Gebrselassie could overcome: "I expected it (the jet lag) but I thought I can handle it. But it's not easy."

Catherine Ndereba had it all her own way as she pulled away from the other competitors to take out the women's race. New Zealand's Alice Mason, Australians Benita Johnson, the 2004 World Cross Country champion, and Lisa Weightman, a Beijing Olympic representative, and Japan's Kaori Yoshida all formed the chasing pack.

Beijing Olympic Marathon gold medallist Constantina Dita dropped off the pace early. It seems the Great Australian Run was one race too many for the Romanian, who has had a grueling racing schedule which included a fourth place in the Chicago marathon after her Beijing win.

Weightman, who would have an amazing run over the 15km journey, took the reins in the early kilometres, and attempted to make a break at the 6km mark. Ndereba responded by going past Weightman, and leaving Johnson and Yoshida to battle out for the minor placings, with Mason coming through from behind. So decisive was Ndereba's move that she almost immediately had a 50 metres lead on the others, a lead she only increased over the second half of the course.

Given the quality of the field, second and third place getters Mason and Weightman were somewhat of a surprise. But there was nothing surprising about the manner in which they pulled away from the more experienced Johnson and Dita. While Weightman and Yoshida ran stride for stride along much of the final kilometres in what seemed like a battle for second, Mason powered through from behind to overtake the duo and pull Weightman along in a sprint to the line. In the end Mason won out to finish with 51:27, with Weightman right on her shoulder in 51:31, and Yoshida fourth, 10 seconds behind.

Benita Johnson was very disappointed with her run, having come off several weeks of solid training in Falls Creek, clocking 180km per week and feeling confident. "I've been training really well," said Johnson, "but unfortunately the races aren't coming together. I'm coming off the back of a tough year, so I guess it's just taking some time." Johnson has indeed had an unfortunate year, with the passing of her father, and the breakup of her marriage.

The softly spoken World champion Ndereba was cautious about her expectations during the race. "I was trying hard to just keep my race," she said. "I was only four weeks ago when I ran my last marathon, so I was looking just to pace myself. I love Melbourne, I'd love to come back again, maybe with my family."

Weightman was the first Australian home, and rounded out a great year which included a 2:32 marathon debut in London, and a 33rd place in the Olympic Marathon. "This was great fun," she said after finishing. "I was a bit surprised. I felt absolutely fantastic up until 8km, and then I got a bit of a stitch, but then that subsided luckily."

Weightman was quick to come to the defence of her countrywoman Benita Johnson: "Benita's had a big year, and is probably a bit tired with everything that has happened."

The Great Australian Run kicked off successfully today, and will no doubt continue into the future. The beauty and weather of Melbourne captivated all the international visitors, and only confirmed Gebrselassie's personal love of Australia. "Absolutely I will try to come back! This is a great long distance nation. It's a beautiful city and a beautiful country. Wherever you go, it's lovely."

Edward Ovadia for the IAAF

BACK
Pages related to this articleDisciplines
50 Metres 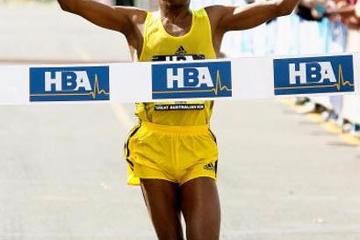 Gebrselassie and Ndereba supreme over 15km in...