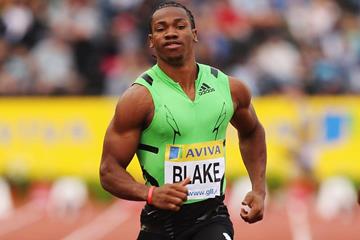 Blake to take on Kilty, Gemili and Collins in Glasgow – IAAF Diamond League

Yohan Blake, the world’s second-fastest man of all time over 100m and 200m, has confirmed that he will run against Britain’s Adam Gemili, world indoor 60m champion Richard Kilty and 2003 world 100m champion Kim Collins on 11-12 July at the Sainsbury’s Glasgow Grand Prix, part of the IAAF Diamond League.

Only fellow Jamaican Usain Bolt has run quicker than Blake, who ran 9.69 in Lausanne in 2012, and the 24-year-old is ready to return from an injury-disrupted 2013 by running at the first IAAF Diamond League in the UK this year at Hampden Park.

“I’m really excited to be coming back to the UK this summer,” said Blake, who will be making his first ever trip to Scotland. “After such a strong 2012 season, it was disappointing not to be able to continue that form into 2013 due to injury. However, I’m looking to use the Sainsbury’s Glasgow Grand Prix to show the world I’m back and ready to light up the track once again.”

The Jamaican, who won a gold and two silver medals at the London 2012 Olympic Games, is well aware of the challenge facing him, but is determined to prove that he is in shape to go even quicker at the Sainsbury’s Glasgow Grand Prix.

“The UK gave the Jamaicans a big welcome for the Olympic Games and I know the British public will put on another great show in July,” he added. “The competition in the Diamond League rivals the competition you get at major championships and it’s that challenge that motivates me.”

Kilty saw off some of the world’s best athletes to win what was considered by many as a surprise gold medal in Sopot and is ready to build on his credentials and is aiming to take more scalps this summer.

“It has been an unforgettable start to the season for me,” said Kilty, who will be facing Blake for the first time. “Running personal bests and winning the World Indoor Championships has put me up there in the world of sprinting and I’m determined to stay there.

“Now it’s all about translating my 60m form into the 100m and the Sainsbury’s Glasgow Grand Prix will give me the platform to test myself against the very best out there. Yohan (Blake), Kim (Collins) and Adam (Gemili) are all great athletes in their own right and I know it’s going to take a fast time to win the race. However, I showed in Poland that I have confidence in my ability and I’m ready to show that again on the biggest stage this summer.”

Kilty’s compatriot Adam Gemili, who is also yet to race against Blake, has also enjoyed recent good fortunes after becoming the second-fastest British athlete ever in the 200m, clocking 19.98 at the 2013 IAAF World Championships.

With British sprinting enjoying a resurgence, the former Chelsea trainee footballer is looking forward to challenging himself against the very best at Hampden Park in July.

“2013 was a great year for me, dipping under 20 seconds in Moscow, and now I will be looking to make similar progress in the 100m,” he said. “The Sainsbury’s Glasgow Grand Prix will present me with the opportunity to go up against the best in the world and give me a springboard for the championships ahead this summer.”

The event also sees a return to the UK for the evergreen Kim Collins, who at 38 years old is producing the best form of his career, running a personal best of 9.97 last year at the Lausanne Diamond League.

Despite admitting athletes are improving year on year, the 2003 world champion from St Kitts and Nevis is not fazed by the challenge that faces him at the Sainsbury’s Glasgow Grand Prix.

“The competition in the 100m never gets any easier and the talent not only on the international scene but in the UK is getting stronger and stronger,” he said. “To be able to compete at the Sainsbury’s Glasgow Grand Prix against the likes of (Yohan) Blake, (Richard) Kilty and (Adam) Gemili is something I will relish and I’ll do everything in my power to show that I’m still a main contender.”

Click here to take part in the Fantasy Diamond Race