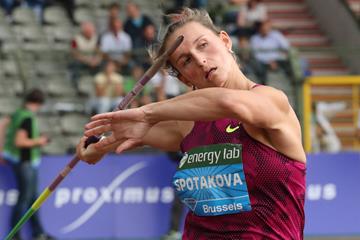 Spotakova and Obergfoll to duel in Eugene – IAAF Diamond League

Barbora Spotakova and Christina Obergfoll head a deep world-class javelin field at the 2015 IAAF Diamond League meeting in Eugene on 30 May, after organisers for the famous Prefontaine Classic announced the line up for the this event on Monday (30).

This particular pair should have a unique rivalry this season as they are the only winners of the Diamond Race in their event during the five seasons of the IAAF Diamond League.

World record-holder and two-time Olympic champion Spotakova of the Czech Republic missed almost all of the 2013 season after giving birth to her son Jan in May that year but returned in 2014 to win the European title and at the IAAF Continental Cup.

Germany's Obergfoll is also a reigning global gold medallist, winning at the 2013 IAAF World Championships before taking last season off for maternity leave, her son being born in October.

Obergfoll has a special fondness for Hayward Field, having won at the past two editions of the Prefontaine Classic when the javelin has been held, in 2011 and 2013, and she owns the meeting record of 67.70m from two years ago.

Russia’s Mariya Abakumova is another major championship gold medallist in the field, winning at the 2011 IAAF World Championships, the last time someone other than Spotakova or Obergfoll won a major gold in this event.

Abakumova's lifetime best of 71.99m is second only to Spotakova’s world record of 72.28m on the all-time list.

Linda Stahl of Germany claimed her most famous victory in 2010 when winning the European title ahead of Obergfoll and Spotakova while South Africa’s Sunette Viljoen is also in the field and she owns the US all-comers best of 69.35m.

Slovenia’s Martina Ratej and her fellow Olympic finalist Madara Palameika from Latvia will add depth to the classy list of leading javelin throwers at the 41st edition of the Prefontaine Classic.