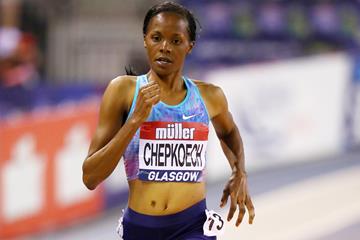 Chepkoech takes on Embaye and Chebet in Karlsruhe

Chepkoech, the steeplechase world champion, has limited racing experience indoors, but she made an impression during her one indoor campaign to date. She finished third in Karlsruhe in 2018 but then went on to win in Dusseldorf and Glasgow, breaking the Kenyan record on both occasions with 4:04.21 and 4:02.21 respectively. She ended the 2018 indoor season by winning the women’s 1500m in that year’s World Indoor Tour.

When Chepkoech has the fastest indoor PB of the 1500m entrants for Karlsruhe, she line up against two women with superior outdoor bests.

Chebet, who finished two places ahead of Chepkoech at the 2018 World Indoor Championships, reduced her best to 3:58.20 in 2019 when finishing seventh at the World Athletics Championships in Doha.